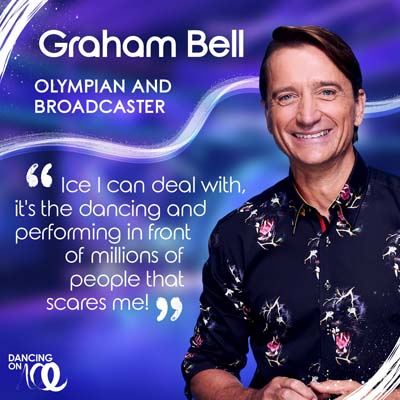 Henley resident and Ski Sunday presenter Graham Bell is swapping his skis for skates this winter season and will be starring on ITV’s Dancing on Ice in January.

The two sportsmen know each other well, with Graham telling the hosts “Colin is an excellent pupil because I actually coached him on Ski Sunday in 2007 and he’s one of the trainees that takes on information so well.”

Graham maybe has some advantage over the other contestants as he has skated before.  He told us, “I first skated as a kid and messed around on the ice.  Also when there was bad weather in the ski resort, I would go and skate and have played a bit of ice hockey.  I have also had a go at speed skating but I’ve never figured skated which is completely new to me.  It’s the dancing that really scares me and performing in character in front of millions of people.  My partner will hopefully help me with that.  I’ve also got a group of really supportive people including my wife (Sarah) and others in Henley plus a secret weapon who will be helping me out with the dancing side.  Laurence from Athlete Services is already helping with my strengthening and conditioning.  No one can do this on their own.  I think the lady pros have a real disadvantage as they basically have to put their faith in their novice partners to lift them with the potential that we drop them and/or we land on top of them.  The level of trust is enormous.”

Flying the flag for Henley retailers, Graham also chose to wear one of Laurence Menswear’s famed colourful shirts (he has many) for his promotional shot above.

Training will start for Graham next week at the Slough ice rink and during his 9 week training he will be tested for Covid each week and will train in a small group of people.  Graham told us he isn’t hoping for a particular partner but is looking forward to finding out who she is and meeting her.

Graham auditioned for the show 3 years ago and is delighted to be on the show this year.  He commented, “It’s very fortunate that this has come along this year as I’ve only worked for 3 days in the last few months and there is still uncertainly of whether BBC Ski Sunday is likely to run this year.  I was due to work at the Olympics in Tokyo this summer and hope that this is just a delay.  I am very lucking to have this opportunity and it’s going to be awesome.”

Does Your Child Need Help to Catch-up After Being Home-Schooled?
Scroll to top