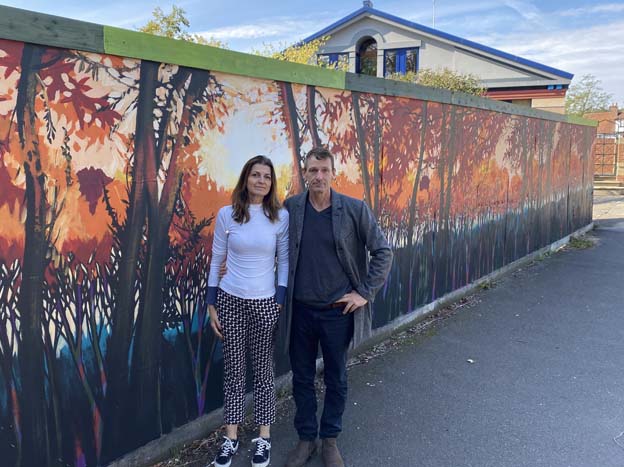 Readers may have noticed the Remenham approach to Henley bridge has become distinctly autumnal with a beautiful mural.

The striking twenty-five metre mural is the work of artist Nicola Sutherland who, along with husband Justin, recently acquired Thames Bridge House.

Nicola said, “The Thames Bridge House site has been an eyesore for years. After the building was demolished the resulting hole was fenced in behind a drab wooden hoarding which I’ve always thought would make an excellent place for a mural. When we bought the site, the first thing I did was to paint the frontage to blend it into the leafy surroundings but, now autumn is here, it needed a proper update to reflect the changing season. So many people have stopped to ask about my work and our plans for the site, it’s amazing how friendly and interested the people of Henley have been.”

Until 2018 the site was occupied by Thames Bridge House, which fell into disrepair after being vacated as offices in 2008. Subsequent owners have planned residential schemes, but turning the plot into a commercially-viable development has proved difficult.

The site has been absorbed into the Sutherlands adjoining property, Bird Place and they believe a viable development is finally within reach. Justin explained, “For many years we’ve watched developers go through something like that grieving process people talk about. Over time, their enthusiasm gives way to denial, bargaining and regret. The problem has been the shape and size of the plot but, now we have been able to re-configure the boundary and provide proper access, it’s a different story. The frontage has also provided a great space for Nicola’s murals. She’s been working on several large-scale projects recently and it’s easy to see why her work is in demand.”

Local architects Spratley and Partners have been completing plans for a new residential scheme based on the expanded plot. There are a mixture of architectural styles in the immediate vicinity. Bird Place is period Queen Anne, Henley Royal Regatta was built in 1985, Bird Place Cottage is a mixture of old and new, and Leander is late Victorian,” added Justin.

Jeremy Spratley and Justin have talked about the importance of respecting the surrounding buildings, Justin said, “We are working towards a design that references Henley’s riverside traditions and looks like it’s been there for years. We’ve reduced five small units to three large apartments, all with day-long light and views across the river, and I’m sure the apartments at Thames Bridge House, or Regatta Wharf as we are thinking of calling it, will be highly sought-after. There’s obviously the local market to consider but agents report record numbers of buyers from London moving out to places like Henley. With Covid on the increase again, Bird Place and the Thames Bridge House site in combination would make a unique residential and office location, so who knows. It’s early days and all options are on the table at the moment.”

Nicola hopes to repaint the wall for Christmas and the Spring if she has time between her other commissions.