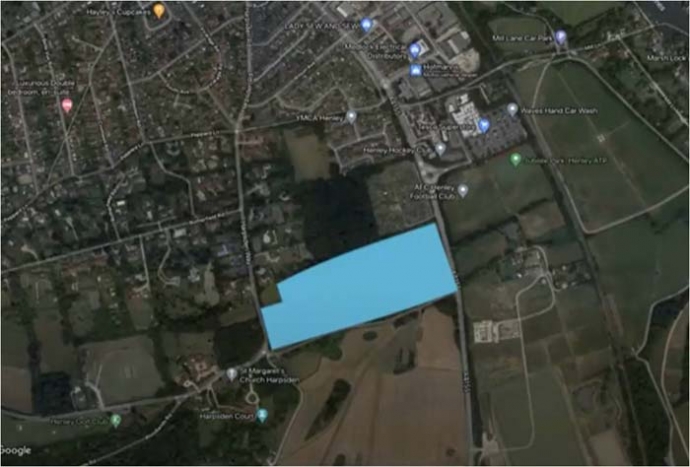 Each presenter was asked to outline why their site was best suited for inclusion in the review of the JHHNP which was adopted in 2016.  There was no decision made on the sites presented and there will be a 6 week public consultation on the proposed sites after further reviews.

The Neighbourhood Plan Committee started the review with the help of a report carried out by AECOM Infrastructure & Environment UK Ltd that included 35 sites for allocation for housing in Henley and Harpsden.  Each site was given a traffic light rating – green for free from constraints for planning to red to insurmountable constraints.  9 of the sites were put forward to Henley Town Council through their ‘call for sites’ last year after it was agreed in 2018 that the original Joint Henley and Harpsden Neighbourhood Plan (JHHNP) adopted in 2016 should be reviewed.  The other sites identified were from the SODC’s Strategic Housing and Economic Land Availability Assessment (SHELAA). The SHELAA is a high-level assessment considering the overall capacity of South Oxfordshire to accommodate housing development in a policy off position.

Each presenter was also asked whether they would gift land for 50 rental social housing units (£500/rental per month) that Henley Town Council would like to be seen built in the town.  The land would be held in a Community Land Trust.  The Committee were delighted to receive a proposal for a gift of land (Harpsden Meadows adjacent to Waterman’s allotments) from the Noble family proposing this (read the details below).

Only 69 houses have been sold out of the 191 homes which are to be built in Phase 1 of the development.  40 of those sold are the affordable value ones.
Proposal – another 110 homes on site off Greys Road with new access.
The proposed development will see a new home for the Chiltern Centre, an educational centre, community centre and community orchard.
Observations made – impact on highways on new access off Greys Road, impact on Area of Outstanding Natural Beauty (AONB), biodiversity, air pollution, impact on Gillotts Lane

Care Home closed in December 2016.  The land is owned by Oxfordshire County Council and was leased to Oxfordshire Care Partnership and Order of St John Care Home.  The lease ended in November 2019 and the land is now on the market.
Included in the 2016 Neighbourhood Plan for 27 dwellings.
Proposal – 37 units (10 extra smaller units) or 70 extra care assisted living units for older residents.
Observations – no detailed plans presented and Chair of the Neighbourhood Plan Committee, Councillor Ken Arlett stated that the developer should look at the history of planning applications for the Youth Centre site for a care home which has been refused twice as it in the 2016 JHNNP allocated for housing.

Gillotts School Playing Fields
50 homes allocated in the 2016 Neighbourhood Plan
Money from the sale of the land hoped to be between £10-20m would be used to improve the sporting facilities with all year round pitches, renovate the school buildings and a purpose built school hall.
Proposal – an increase in housing from 50 – to up 100 units.
Delay in progressing the site has been due to a restrictive covenant on the access over the bridleway to give access to the site.  A draft agreement is now in place with all parties.  There is a further agreement needed to gain access over a copse area.
Observations/Suggestions – protection of the ecological habitat, impact on traffic on Blandy Road, use of hall by community groups e.g. Henley Symphony orchestra

Borlase Field (next to Swiss Farm and Henley Rugby Club)
Allocated RED by AECOM – This site is not in conformity with South Oxfordshire Local Plan 2011 (saved policies) Policy H4 as the site is outside the built-up area.  Although the site may be suitable on policy grounds should the emerging plan become adopted policy.
The site is owned by the Borlase family and is used by the community particularly Henley Rugby Club as an overflow car park, for Henley Half Marathon and previously Round Table fireworks.
Proposal presented was for 40 dwellings (mixture of sizes) with 20 affordable housing, community orchard/allotments, plus a large community use area.  The family wish to make a positive contribution to the town and have a flexible stance.  Stated that it was not a profit driven development.
Observations – Area of Outstanding Natural Beauty (AONB), border trees and adjoining land uses

Thames Poultry Farm
Put forward in the call to sites for Neighbourhood Plan review.  Allocated AMBER by AECOM – The site does not currently meet local policy as it is not within or adjacent to the built-up area however, the adjoining site (site 1036) has planning permission and is under construction which would change this.
The land was originally part of Thames Fam before the land was split and bought by the Bryant family 20 years ago.
Planning application refused on June 2020 by SODC as the site is not on the grounds of an infill site.  Planning appeal to be submitted shortly.
Proposal to keep the original house and build 3 dwellings (2 x 4 bedroom houses and 1 x 3 bedroom house)
Observations – concerns over access via unmade track, loss of trees, no affordable housing.

Land West of Fairmile (additional land)
Extension to development site included in the JHNNP 2016 for 60 units.
Two public consultations have taken place in 2018 and 2019.  After 2018 consultation the plan for 83 units was reduced to 72 units.
Outline Planning submitted to SODC with decision by end of the 2020.
Access off the Fairmile has been agreed by Henley Town Council and Oxfordshire Highways.
Proposal – 72 dwellings with 29 affordable homes.  Comprehensive landscape plan with green open spaces, a play area and planting of trees around the perimeter. Cycle route linking to Luker Avenue. Ecological enhancements which include the preservation of the large dormouse habitat, bat boxes and the translocation of a slow worm population to another site.
Observations/Suggestions – removal of 53 lower grade trees and how many will be replaced to be confirm plus suggestion to put a pond back into the proposal.

Juliet Noble and her sister were left this piece of land in their Grandmother’s will and was originally part of Harpsden Court Farm.
Juliet said, “This field is the last piece of land owned by the Noble family and my feeling is that I have come by it by pure accident of birth and I would like it to be used benefit the local community in terms of building good quality housing for rent to key workers and a large  part of open space to be accessible to all.  Over the years I have been approached by developers and have turned them down.  I feel it is the right time to do something with it.”
Proposal – 40-60 100% social houses to rent in 4 phases probably over 10-15 years with funding coming from previous phases.  A Community Land Trust would be created with a Board of Trustees created to manage the site.
Observations/Suggestions – more than  50% of the land is in flood zone 3 and a bridge would be required to give access over this.  Kester George, Chair of Harpsden Parish Council made a proposal that a number of Harpsden Residents want to keep it as a greenfield site and would Juliet consider selling it to them and the money used to develop social housing on another site e.g. former Chilterns End Court Care home site.

Paul Barrett, Chair of the Chiltern Centre Trustees proposed their site for redevelopment.
Proposal – 3 houses
Observations – selling off the land would allow the charity to move to a purpose built site at Highlands Farm on the Phase II site proposed.  The current site is expensive to maintain and there is no expansion possible.  Agreed partnership with Crest Nicholson who have agreed to donate the land.  The charity would need to launch appeal to build the new facility.  Charity has an overage agreement with Oxfordshire County Council which expires in 2027 which states that they have to pay 50% of net gain of the buying price of £344K in 2005.

Planning permission already approved for 40 homes (16 affordable) and 10,000 sq feet of commercial space.  The site is ready to start building in the next few months.
Proposal – to replace the commercial space with 20 more homes (9 affordable) as it is not thought this is viable now.
Observations/Suggestions – reduction of commercial space on the extra 1 hectare SODC have proposed to be found in the emerging Local Plan.  Suggestions to have workshop space below the housing, or small office space to rent for homeworkers to be considered.

Original barn built by Engbers garden centre for planting and propagation.
Planning permission already approved for conversion of barn into 4 x 3 storey residential units.
Proposal – to resubmit the planning application to provide up to 9 residential units.
Observations – overdevelopment of site

The Henley College sites in Deanfield Avenue and Rotherfield sites were shortlisted in the AECOM survey to develop on.  These sites have been removed now.  The Principal Satwant Deol said, “We confirm that at this stage that The Henley College have no plans for development of our land or external site, but we are continuing the internal development of a mini stem centre with the support of the Oxfordshire LEP, including a digital hub for Creative Media and therefore at this stage have no requirement to further develop our land.”

You can watch all the presentations via Henley Town Council You Tube channel at https://www.youtube.com/channel/UCXGNEuRlaeVNTIiJgjqsAZA