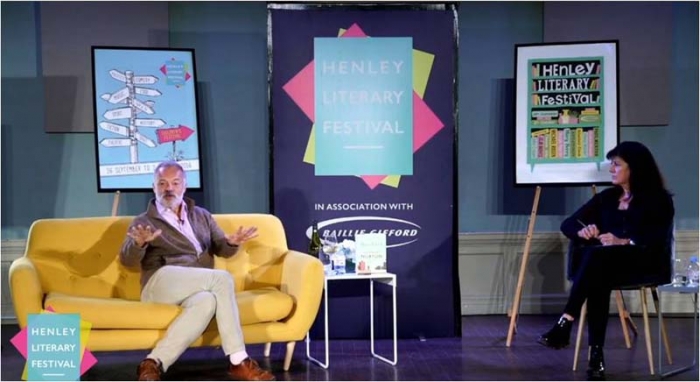 Graham Norton has met hundreds of guests over the 28 years of his talk show which started on Channel 4.  For once, he was the guest on the couch being interviewed by Emma Freud for the Henley Literary Festival in the Town Hall on Sunday night about his new novel “Home Stretch”.

He said, “I still get excited about meeting new guests but they need to be interesting and need to be interested in other people too and the reveal is how they react with other people.”  He added, “Look out for those guests that are just looking into the monitor to see their own face!” His secret favourite guest is Miriam Margolyes, explaining, “She brings a fantastic dynamic to the couch and it’s lovely to watch and see if the other guests haven’t met her before!”  Asked whether he could do serious in- depth interviews, Graham replied “I could probably cobble one together but I would be quite bored and I wouldn’t do them as well as others do them so that’s why I don’t do them.” An audience member asked who was the most famous person he had on his phone?  He replied, “I don’t really know but I left my phone in a taxi once and someone called Dawn French in the early hours of the morning so perhaps when they scrolled through they thought she was!”

Emma described Graham’s new novel as, “your third, but most personal” and thought that the character Tim was based on Graham himself.  Graham replied by saying “I’ve invested a bit of myself if every character in the book.”  The book starts with a car crash in Ireland when the driver survives but the passengers don’t.  Graham read the first pages of the book at the end of the talk.  Emma told the audience that the book opens out to be “optimistic with a big twist and a shocking, dramatic and brilliant end.”

Asked whether Graham would like to win a BAFTA or a Booker prize, Graham replied, “Well I’ve got 9 BAFTAs already and asked is a Booker prize an actual award and do you have to dust it?  No one knew the answer!

The talk wasn’t all laughs, Graham described a horrendous life threatening incident when he was mugged and stabbed after walking home from a party in his second year of drama school in London.  He commented, “It put so much into perspective, when you’re young.  It made me fearless as it was the worst thing that could happen and I survived.”

Graham didn’t come out as gay until he moved to London in 1984. Emma asked do you feel part of the LGBT community and why he doesn’t publicly do more?  Graham commented, “I don’t use my platform – it’s probably the one thing my younger self would say to me. I prefer to hear politicians or proper campaigners talking about things, I think when celebrities often raise the profile, it trivialises that subject.   I’m also lazy and working for the BBC I feel it would be conflicted plus I scarcely care about what I think about stuff.”

There’s still some great events to come for this year’s Henley Literary Festival – John Grisham, Jodie Picoult and Damon Hill and Johnny Herbert.  To check out dates and tickets go to https://henleyliteraryfestival.co.uk/

Who Put the Wall Back…? 🤔
Scroll to top