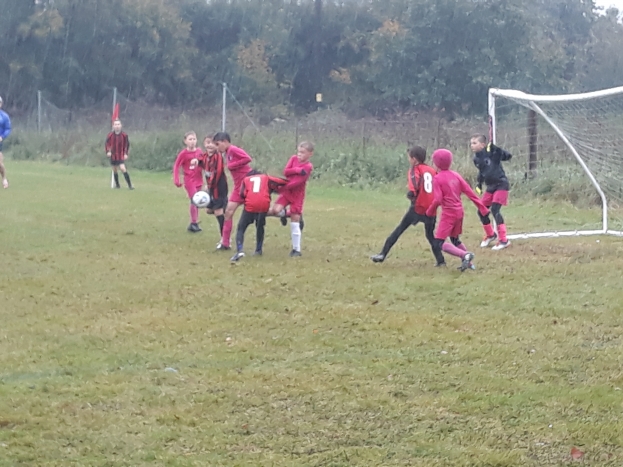 In contrast to their recent matches, the Henley Hurricanes U10s played their first cup game of the season with the full force of Storm Alex. The first and final quarters in particular were played in driving rain. Their opposition were local rivals Henley Lions U10s, with some classroom rivalries at stake as well as a place in the next round of the cup.

Despite the awful weather, the game started keenly with both teams seeking to play a fast, attacking brand of football. The wet weather made the ball more difficult to control, which was a challenge at times. It was the Lions who had the best of the opening exchanges, with one shot narrowly wide into the side netting.

Gradually, the Hurricanes passing game came together, with Will Lindsay, Jack Callaway, Shiva Vadhoolan, Jack Tookey and Oscar Robinson working together to great effect. Will Lindsay’s shot from the left of the box brought an outstanding save from the Lions’ keeper, whilst Oscar Robinson used his skills and determination to great effect. At the other end, defender Dominic Ellis and goalkeeper Harrison Carpenter Buckett were working well together.

In the second quarter, the momentum shifted towards the Lions, who put the Hurricanes under pressure and forced them into a lengthy spell of defence. Having largely weathered the storm, the Hurricanes were able to exert pressure of their own. A spell in front of the Lions’ goal led to a scoring opportunity, Luca Currie making no mistake in front of goal.

The second half saw the teams continue to work hard. For the Hurricanes, Oscar Robinson was showing his skills in midfield, and Harrison Carpenter Buckett was decisive in collecting the loose ball. However, some good, fast passing football from the Lions changed the complexion of the game completely leaving the Hurricanes’ defence exposed. In the final quarter, the weather deteriorated considerably, and the Hurricanes still defended against the Lions’ attacks. A determined run from Dominic Ellis followed by a great pass to Oscar Robinson restored some equilibrium to the game. The last few minutes belonged to the Hurricanes, who peppered the Lions’ goal, bringing several memorable saves from their goalkeeper.

The game was highly competitive, despite the driving rain, and both teams move on to their second cup games next week.