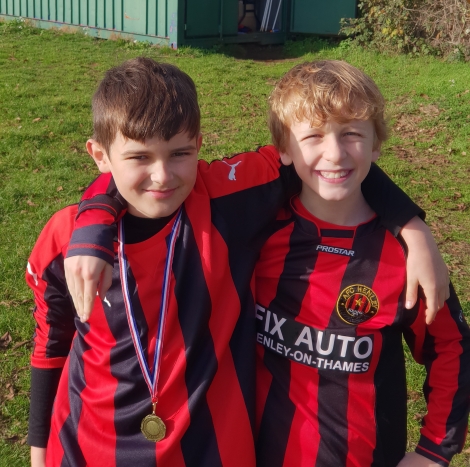 The U14 AFC Henley Hurricanes season which was just starting to build up a head of steam came to an abrupt halt on Saturday as they suffered a 4-1 reverse against Bracknell in this East Berks Division 1 game at Jubilee Park.

The Hurricanes season had got off to a poor start as they had lost their first two games having conceded 11 goals with only 1 scored (by Sam Archibald).

However the Hurricanes had whipped up a storm in their last 3 games winning all of them scoring 14 goals whilst only conceding 3. New signing Christian Rowbotham has hit the top of the scoring charts notching 6 goals in this period with the other scorers being Harvey Herbert (5), Henry Mendelssohn (2) and Morgen Wynn-Jones (1).

However perhaps it was over confidence that led the Hurricanes to start the game so slowly as they found themselves 2 nil down inside 10 minutes. Captain Oliver Saunders in the home goal was powerless to stop either effort and then had to pull off a great save as Bracknell looked to add a third.

Joe Turner and Tom Atkinson had to call on deep reserves of strength as they looked to gain the Hurricanes a platform in the game by anchoring the central midfield and letting the Hurricanes more expansive players get to work further up the pitch.

After this came a sustained period of Hurricanes pressure. Both Harvey Herbert and Henry Mendelssohn went very close to adding to the Hurricanes tally but Bracknell made it through to half time with their lead intact.

The Hurricanes defence was being bravely led by Joe Winpenny and Luca Thomson before an ankle injury forced Thomson off. This led to a shuffling of the Hurricanes pack as Tom Bonser was moved into central midfield, Sam Archibald into an unfamiliar left back role and Turner into centre back.

Bonser was called straight into action as he had to make a strong tackle to break up a Bracknell attack. Archibald also took to his new role very well. He broke up a Bracknell attack down their right side and then released Morgen Wynn-Jones to launch a Hurricanes counterattack. Wynn-Jones was playing in his last game for the Hurricanes and he made them regret the move as a delightful flick sent him away down the left in an all too rare Hurricanes attack.

Matthew Dippenaar put in a real shift at full back and was at his tenacious best to stop a dangerous looking Bracknell chance.

However, perhaps the defensive disruption led to a lapse in concentration as Bracknell added a third to make it 3-1.

Bracknell then added a fourth through a penalty and the Hurricanes started to fall apart as ill discipline and some rash challenges marred the end of a disappointing performance.

Managers Turner and Atkinson were said to be disappointed by the application of the squad and were looking for a reaction against local rivals Rotherfield on Halloween weekend in what promises to be a lively derby.