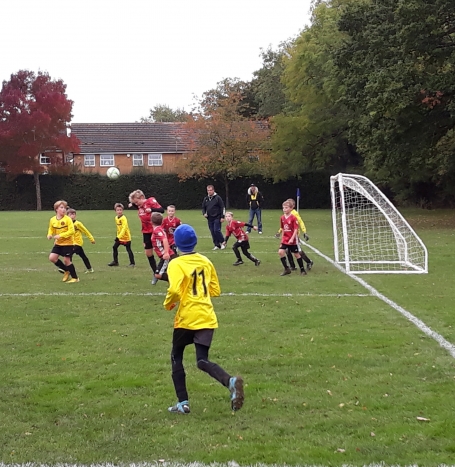 A cloudy morning was the backdrop for the AFC Henley Hurricanes U10s return to league football. Their opponents were Bracknell Town U10s, who also had a red kit, making it a second week in yellow away kit for the Hurricanes.

Both teams started the game positively, and it was Bracknell who got the first shot in. The Hurricanes were starting to build their passing game and move the ball down the pitch. Bracknell remained an attacking threat, one of their players staying very strong on the edge of the box despite the attention of three Hurricanes defenders. Gradually, the Hurricanes grew in confidence, a cross from Oscar Robinson led to a shot from Will Lindsay, bringing a good save from the Bracknell keeper. Corners from Shiva Vadhoolan and Jack Tookey, and a great through ball from Will Lindsay to Oscar Robinson meant the Hurricanes ended the first quarter with the upper hand.

The second quarter followed the same pattern as the first. Bracknell again had the first shot, which Hurricanes goalkeeper Harrison Carpenter Buckett had under control. Again, the Hurricanes grew their passing game, working together to get the ball to their forwards. Jack Callaway and Oscar Robinson had a good understanding up front, and were well supported by Will Goulden and Jack Tookey in defence. Oscar Robinson made a great solo run through the Bracknell defence, shooting very narrowly wide. The quarter ended with another fine save from Harrison Carpenter Buckett to a powerful shot from a Bracknell striker.

The Hurricanes began the third quarter confidently with Jake Thatcher persevering on the right and Will Lindsay on the left. Both were working well with striker Will Goulden. In defence, Dominic Ellis and Nicolas Hernandez St Clair were also working together, talking to each other and covering when necessary. One especially effective passing move started with Dominic Ellis winning the ball in defence, passing to Nicolas Hernandez St Clair who found Will Lindsay, who then in turn crossed to Will Goulden to slot home from the edge of the box.

The final quarter was played in a similar vein to the previous one. Will Lindsay’s shot from the left of the box was well saved by the Bracknell keeper. The Hurricanes had grown in confidence throughout the game and played as a team to great effect. Nicolas Hernandez St Clair was deservedly man-of-the-match for his work in midfield, providing the missing link between defence and attack, but also tackling effectively and not giving up.