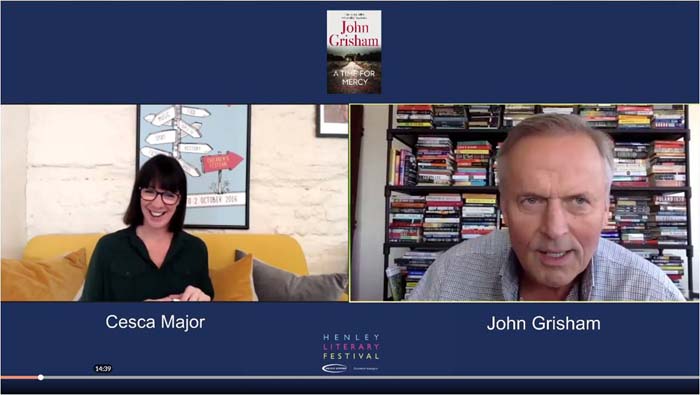 After securing one of the world’s best-selling authors John Grisham to speak at the Henley Literary Festival from America, the on-line talk was nearly thwarted after a fire alarm went off in his home 10 minutes into the interview.

Initially John didn’t know what the noise was and thought it was a phone. Cesca Major who was interviewing him at first said, “No Cheltenham festival, he’s ours!”  John went to investigate and found the alarm outside his apartment on the sixth floor and a few minutes later it stopped.  John said, “That’s never happened before and I don’t know how I would get out/jump out!”

John, aged 65 has written 45 books, selling 300 million books worldwide in 56 countries and 8 of his books have been made into movies including his second one The Firm (1993) starring Tom Cruise which was pivotal in launching his career.  John’s new book A Time For Mercy launched last week is a sequel to his first book Time to Kill which was turned down by 15 agents and 15 publishers and initially only had a 5,000 print run. It’s gone on to sell 20 million copies. John recalled a Sunday morning in January 1990 when he a got a call from agent to say that they had sold the film rights of The Firm to Paramount.  He said, “We hadn’t even sold the book rights!  It was like winning the lottery.  I made more money then, than I had the whole 10 years of being a lawyer.”

After all the success, what keeps John motivated?  He replied, “I can’t see myself slowing down.  I write for 4/5 hours (around 1,000 words) every morning from around 7am.  I’m not sure what else I would do to fill that gap.” He writes 1 to 2 books every year and has a very strict timetable, starting on 1 January every year and finishing on 1 July.  Asked does that mean you’re not much fun on New Year’s Eve then? John replied, “My wife and I just stay at home, have a nice a meal and sit in front of the fire.  We try to stay up for the New York ball drop but we rarely manage it!”

John’s first book Time to Kill was based on a case he heard in a court house whilst John was lawyer and it took three years to write.  He wrote the first chapter and gave it to his wife to read.  John explained, “I said I’ve got something I want you to look at. I was so nervous I left the house for a walk.  When I returned she said, “It’s pretty good I’d like to read some more.”  He then continued to write it before work every morning. John never re-reads his books but because his new book was a sequel he said, “I can’t normally return to a book but I was nearing the end of writing Time to Mercy and skimmed through 485 pages to check any mistakes.  I ploughed through it but it wasn’t fun.  I sure some people are going to find some discrepancies.”

In between writing John loves to travel with his wife.  He said at the start of the interview “I wish I could there with you, the town sounds wonderful.  I would love to come to the book festival maybe next year.  Harriet Reed-Ryan from Henley Festival concluded by saying, “What a night! We are definitely, taking you up on you offer to come to Henley when you can.” John replied, “I’ll see you all there, live in person!”