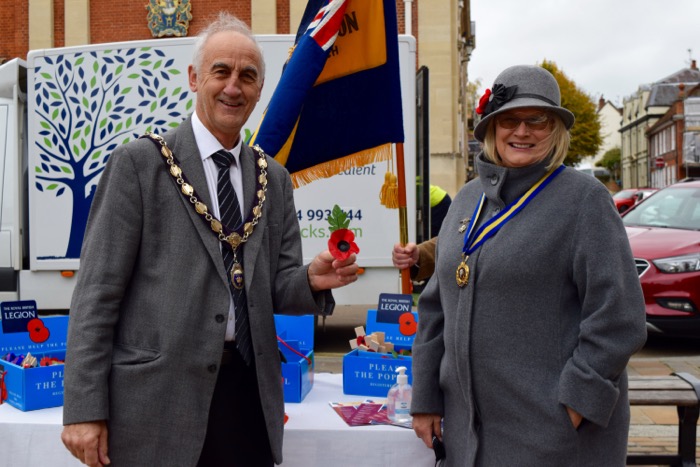 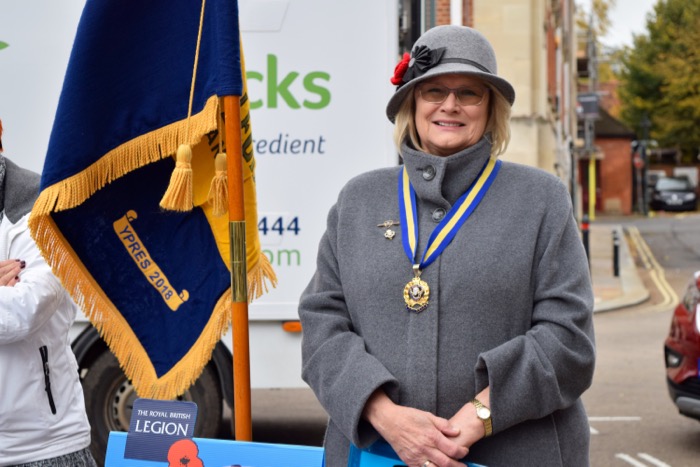 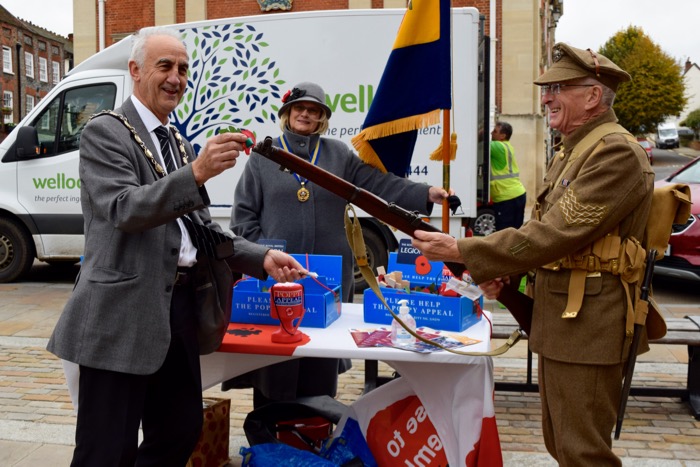 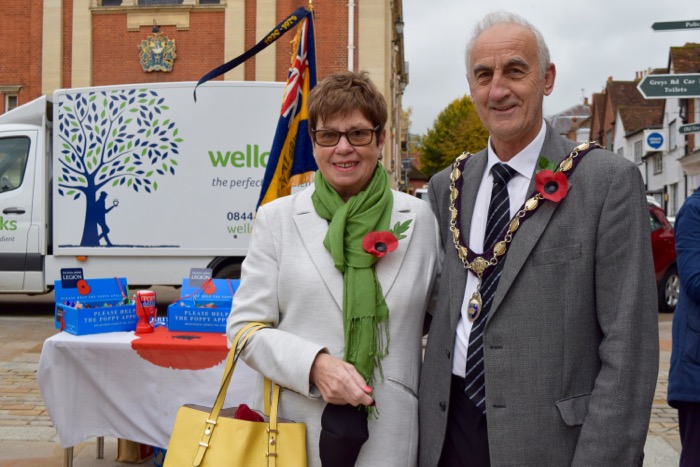 The Royal British Legion Poppy Appeal launched on Saturday morning in Falaise Square with a much smaller ceremony than usual. Though the event looked decidedly different this year due to the coronavirus pandemic, the tradition of Henley’s Mayor purchasing the first poppy was still upheld to mark the occasion.

Mayor Ken Arlett made his donation and picked up his poppy from the table to avoid contact with the others. However, to add some flair to the first poppy purchase, the Mayor placed his poppy on the end of John Green’s replica rifle, allowing John to still ‘present’ it to him without breaking social distancing regulations!

Though it was a shame not to see Sam Brown and her ukulele band at this year’s poppy appeal launch, John Green still dressed for the occasion in an original First World War soldier’s uniform.

The Royal British Legion is expecting to receive far less in donations to the poppy appeal this year due to the coronavirus pandemic, particularly as they will not be doing street or doorstep collections. Henley poppy appeal organiser, Annie Arscott said, “As ever, raising funds for the Royal British Legion is not just for [servicemen and women]; it’s for their families and the people who support them. Money will be down this year as we can’t do street collections or house to house. We’re looking for different ways for people to donate.”

The 2020 poppy appeal is mostly relying on local shops, pubs, restaurants, cafes, and other businesses for their support. Poppies are already available in many of the Henley businesses, though Annie Arscott stressed those who have not yet asked for a collection pot can call her on 07702 130432.

John Green said, “Since Covid, everything has changed, but what has not changed is the need to support servicemen and women and their families. We’re calling on the people of Henley for their support.”

Another way to show your support for the poppy is appeal is by entering the Remembrance window decorating competition. Henley residents and shops are invited by the RBL to craft a Remembrance window display, to be installed from November 8th-12th. To enter the competition, email a photo of your window to anniearscott51@gmail.com by 5pm on 12 November.

Henley’s Remembrance Service will be a similarly small affair on Sunday 8th November, although it will be live streamed by Richard Pinches from Meadows Farm Studios. You will be able to watch the ceremony from the comfort of your own home on Sunday 8th at 11am via YouTube: https://youtu.be/iyITMk4dfHw