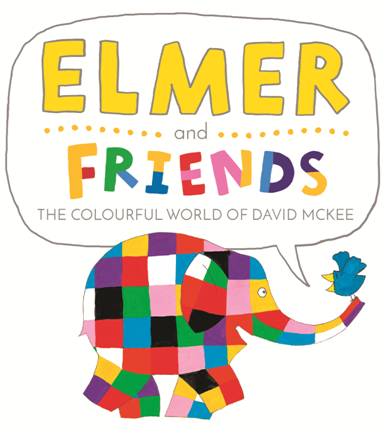 The first ever major retrospective of David McKee’s striking illustration, ELMER and Friends: The Colourful World of David McKee, opens at the River & Rowing Museum on 20 November 2020. Visitors are invited to step into David McKee’s colourful world in this playful exhibition from Seven Stories, The National Centre for Children’s Books and David’s publisher Andersen Press.

As well as original illustrations from the Elmer series, this celebratory and feel-good exhibition will feature original artwork from favourites including Mr Benn, Not Now Bernard and King Rollo, together with the opportunity to spend quality time simply pouring over these joyful books.

Big and small fans of McKee’s vibrant illustrations, many on display for the first time, can explore his world through multi-sensory elements including colour, texture, sound and magnifying glasses, including an interactive mirrored walkway. The exhibition will delight younger visitors whilst taking older audiences on a trip down memory lane as they rediscover old favourites like Mr Benn.

Elmer remains one of the most widely read children’s book series of all time, selling over ten million copies worldwide since it was first published by Andersen Press in 1989. Written and illustrated by celebrated children’s author and artist David McKee, the Elmer books have been translated into more than 60 languages and now new books, toys and clothing add to the world of Elmer the Patchwork Elephant. Awarded the Book Trust lifetime achievement award in 2020 as well as Illustrator of the Year at the British Book Awards 2020, this year has been a true celebration of David McKee and his work.

In the first book of the iconic series, Elmer discovers that when he tries to change his appearance in order to ‘blend in’ with the other elephants, they no longer recognise him, or accept him. This makes Elmer sad, and he experiences how it feels to be treated like an outcast, after being ostracised by his old friends. It’s only when it begins to rain, and the grey paint that Elmer has covered himself with starts to disappear, that Elmer’s ‘true colours’ are revealed, much to the surprise and delight of his friends, who preferred his multi-coloured and fun-loving self.

Sarah Posey, Director of the Museum, says, “David’s books are modern classics. Elmer is about celebrating your own true colours, perfect for opening up conversations around accepting difference. We’re very excited to welcome visitors to this life-affirming and colourful exhibition to brighten up these winter months and as a focus for celebration over Christmas and the New Year.”

David McKee, author of Elmer added, “Elmer is really about accepting who you are, about celebrating difference. We are all different to a greater or lesser degree. We are all different, with so many differences, difference of colour, of accents, but also of size, shape and how we dress. The differences are what make the world so rich. It’s strange because we humans seem to like difference in other things – in dogs and trees and flowers, but we don’t accept it in people. If people aren’t like us, we don’t accept them. Elmer tried to be like the other elephants but in the end he has to be himself. I look forward to seeing the faces of all the children and families when they step into the exhibition at the River & Rowing Museum.”

Fans of Elmer, Mr Benn and other David McKee favourites can enjoy the exhibition at the River & Rowing Museum, Henley on Thames, from 20 November 2020 – 14 March 2021.  Pre-booking is essential for entry to the exhibition and the Museum as a whole.