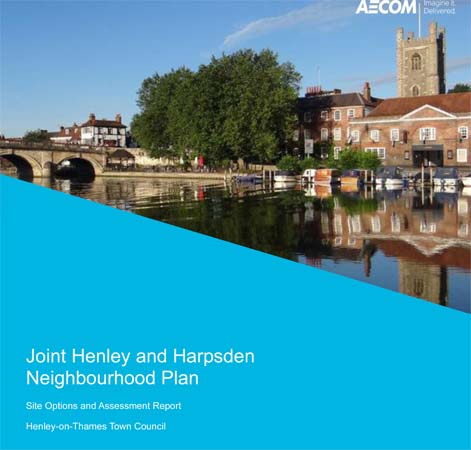 A further 3 presentations on proposals for 3 housing sites were presented to the Joint Harpsden & Henley Neighbourhood Plan committee (JHHNP), Councillors, interested parties and residents on Monday over Zoom.

Each presenter was asked to outline why their site was best suited for inclusion in the review of the JHHNP which was adopted in 2016.  There was no decision made on the sites presented and there will be a 6 week public consultation on the proposed sites after further reviews.  It is hoped that a public exhibition of all 13 proposed housing sites would take place in the Town Hall in January/February next year.

The Neighbourhood Plan Committee started the review with the help of a report carried out by AECOM Infrastructure & Environment UK Ltd that included 35 sites for allocation for housing in Henley and Harpsden.  Each site was given a traffic light rating – green for free from constraints for planning to red to insurmountable constraints.

Planning application submitted in July 2020 for 20 homes with affordable homes was recommended refusal by Henley Town Council, Harpsden Parish and Shiplake Parish Councils.  Henley Town Council commented, “The application site lies on the edge of the settlement of Shiplake, it is not a site allocated for development in a Development Plan, including a Neighbourhood Plan and should not be considered an infill site within a built up limits of the settlement. Irrespective of the development recently granted at Thames Farm, this site being developed would erode the semi-rural character of this stretch of the village.”

An amended application has recently been submitted to address the comments made and will be reviewed by HTC Planning Committee next week.

Observations – surface water flooding on site, will significantly change the character of this area, dangerous pedestrian road crossing to Shiplake Village and outside of settlement.  Not included in the AECOM report.

The site was allocated for 23 houses in the JHHNP with 8 affordable.

B&M Care Home bought the site in 2015 before the JHHNP was adopted in 2016.  Owner of B&M Care Homes took 20 years to find a site in Henley that was within walking distance of the town centre.

Planning Consultant confirmed that the development wouldn’t be built until at least 2024 and would provide the increasing demand for dementia care provision.  Links would be made with Henley College and Gillotts and an apprenticeship scheme would be available.  Affordable flats would be available for care workers.

Observations made – too many care home beds in Henley and a new Care Village has planning permission to be built in Shiplake.  Are the statistics quoted for demand for Henley?

Proposal to build 100 homes on this site with access via 53 Blandy Road which has been bought by Bloor Homes.  Working with Gillotts School on access to their proposed development.  To include 40% affordable and would discuss requirements for social housing.  Focus to be on family housing.

AECOM report gave this RED stating this site does not confirm to the South Oxfordshire Local Plan 2011 as the site is adjacent rather than within the built-up area.

This site was included in the sites put forward for the 2016 JHNNP but was not included.  It was the one of the least supported sites in the public consultation.

Observations made – the site is on a plateau and the AONB would be impacted by development, light pollution and spoiling views.  Impact on traffic on to Blandy Road (currently a quiet residential road).