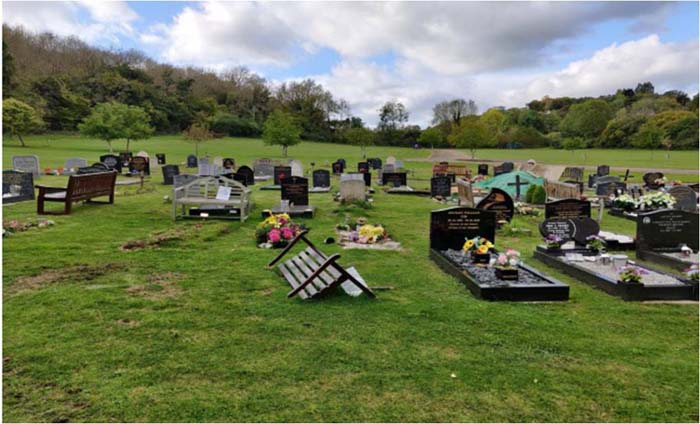 With the introduction of a new Henley Town Council Cemetery Bench Policy being introduced, a detailed review of the Fairmile Cemetery benches has now been completed by the Cemetery Manager, Parks Manager and the Town Clerk with every bench individually accessed on its structure, safety, condition and positioning.

In September a notice was attached to all benches that had appeared without permission from the Council which upset many families.  The Town Clerk, made a public apology for the wording on the notice.

In the review it was noted that the majority of the benches in the old cemetery were provided by the overseeing council at the time and in a good condition and position however it was felt that the majority of benches (31) placed in the new cemetery had been placed without permission and were either of a poor quality, broken and/or placed in an unsuitable location.

By placing the benches without the permission of the Council and allowing them to remain the Council would become liable should
someone be injured as a result of a broken or unsafe bench.

At the Recreation & Amenities Committee meeting last week they recommended a report which would see all owners of the benches contacted and given the following options available:
• Bench to remain in same position and seek permission from owners to refurbish or anchor bench to stabilise it.
• Bench to remain, but discuss options to move to another position
• Bench unsafe or broken and options to be discussed for removal by them or council and replacement if required.

If a bench is to remain, a yearly inspection will be carried out by the Parks Manager to decide condition of bench and if it deteriorates, owners will be notified that the bench will be removed.

Councillor David Eggleton asked whether the owners of the benches could maintain their own benches.  The Town Clerk agreed they could as long as they informed the Council first.

Those benches that have no name or contact available will have a note attached to the bench to contact the Town Hall to discuss options for the bench for a period of two months.

It was agreed that all benches would be reviewed on an individual basis.