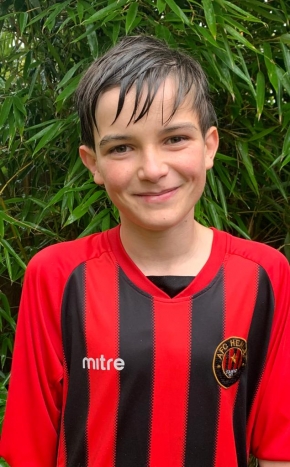 The U14 AFC Henley Hurricanes drew 2-2 away at the Rotherfield Scorpions in this East Berks Division 1 game.

In a keenly contested local derby it was the Hurricanes that were out of the blocks quickly as they started well.

Tom Bonser was doing the same down the right and he also showed his defensive quality with some great tackles. Man of the match Joe Turner was having a rock solid game at sweeper as he hoovered up anything that came his way and sprayed the ball about quickly and accurately from the back.

The early pressure soon told as Henry Mendelssohn picked up Ben Horner’s goal kick in midfield and without having to look up pinged a 20 yard through ball to striker Harvey Herbert. The delightful pass cut the Rotherfield defence to shreds but Herbert still had work to do.

He sold the Rotherfield keeper a wonderful dummy before skipping past him and planting the ball into the empty net to send the away fans into raptures.

Keeper Horner had to be alert to pull off a good save to preserve the Hurricanes lead and Oliver Saunders was giving him good protection in his holding midfield role.

However, at Halloween the Hurricanes were always likely to give their supporters a fright as they conceded soon after as the game ended 1-1 at half time.

After the break it was Matthew Dippenaar and Sam Archibald who were proving a real nuisance up front for the Hurricanes as they tried to spook the opposition back line and re-establish the Hurricanes lead.

However it was Rotherfield who turned the tables on the Hurricanes as the hosts scored from a cheaply conceded corner. 2-1 down and playing into the face of the rain and wind it could have easily turned into a horror show for the Hurricanes but they refused to lie down in what looked a grave situation.

Joe Winpenny was throwing himself into tackles as if his life depended on it as he gave the Hurricanes the belief to press for the equaliser. It was Mr Versatile Tom Yeoman though who provided the assist for the goal. Yeoman who had played up front in the first half was putting in a shift at centre back when he spotted the run of Christian Rowbotham. Rowbotham ran down the right channel and then held off the Rotherfield defence before firing a clinical finish into the bottom left hand corner of the goal to make it 2-2.

The Hurricanes then had two chances to win the game. Sam Winters who had been a power house all game in the centre of midfield came up for a corner for the visitors and having ghosted in at the far post sent his header just over the top of the bar.

Having missed that trick it was Tom Atkinson who tried to deliver the final treat of the match. Rowbotham delivered a magic cross after more good work down the right and Atkinson produced a sublime back heel that headed just wide of the far post.

The game ended 2 -2 though as there was to be no final resurrection for the Hurricanes.

Managers Turner and Atkinson were said to be over the moon with the boys’ attitude and performance but were bitterly disappointed to hear the Government’s decision to ban grass roots sports until December at the earliest.

For those wishing to remind the Government that grass roots sport can continue safely throughout lock down please head to “change.org” and look for the “ Keep grassroots Football going throughout Lockdown” petition.