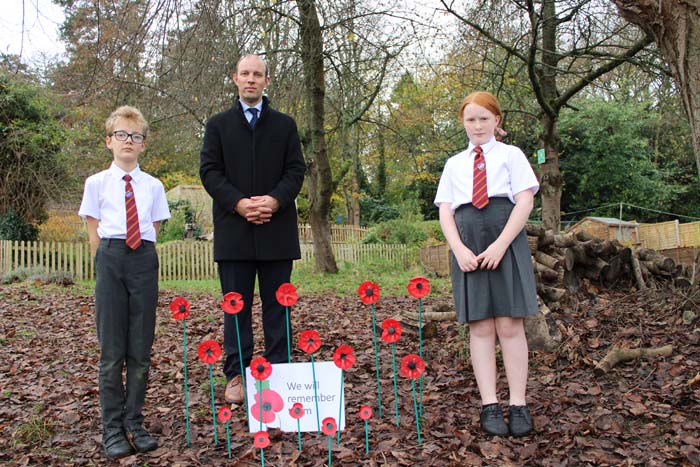 A small ceremony on the Town Hall steps took place on Thursday to mark Armistice Day and Henley school children also showed their respect to the fallen.

At Badgemore School, Head Girl and Boy, Ella and James spoke before the last post was played and a minute’s silence observed.  Ella said, “We are together today at the eleventh hour of the eleventh day of the eleventh month to remember when the guns fell silent at the end of World War I on 11 November 1918.  James said, “Many expected WW1 to be short-lived with talk of troops being home by Christmas.  However, by November it was already clear that this was not the case.  That war would continue for 4 more long years with tens of millions of soldiers and civilians dying or seriously wounded.

This was the first time the children had spoken publicly in front of the school.  Ella said, “I was really nervous but proud.  I practice a lot at home beforehand.  James added, “It was the first time I’ve ever spoken in public.  I wasn’t nervous, it just felt natural.”  Forest School Teacher, Caroline Jacobs had brought some of her daughter’s 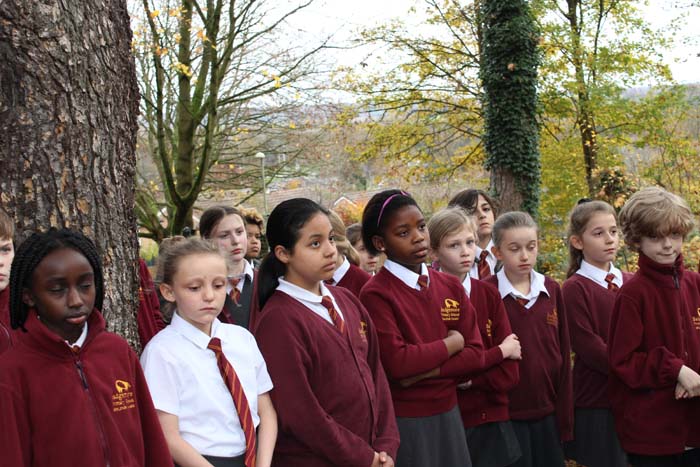 Amelia poppies she had made for Army Cadets to be displayed in school grounds for the occasion.  Headteacher Mr Hoskins contemplated, “As many of our grandparents and great-grandparents pass away, it is so important to continue the traditions of Remembrance Day for younger generations. We have to learn from history so that we do not make the same mistakes again.”

At Rupert House School, the pupils were joined by Father Jeremy who reflected on the sacrifices made by others for our freedom and led the school in prayer, and Mike Willoughby from the Henley Lest We Forget project who spoke of the research he has conducted into his own family history.  He told the pupils, “My personal research into these men (who gave their lives in the two world wars) started back in 2006 when I discovered that my Grandad had a younger brother (my Great Uncle Jack) who had died in one of the largest battles of WW1.  I had great difficulty finding any information about him.  It was then that I came to realise that even in our own area there were hundreds of men on local war memorials that we knew nothing about and they deserved far more than being just a name carved on a memorial or recorded in the local newspaper.”  Afterwards Mike commented, “It is always a privilege to be asked to attend Rupert House on Armistice Day.  They take so much trouble over it and all the kids understand it.  Mike’s wife, Lesley added, “It’s so good to pass on this tradition and information to the next generation.” 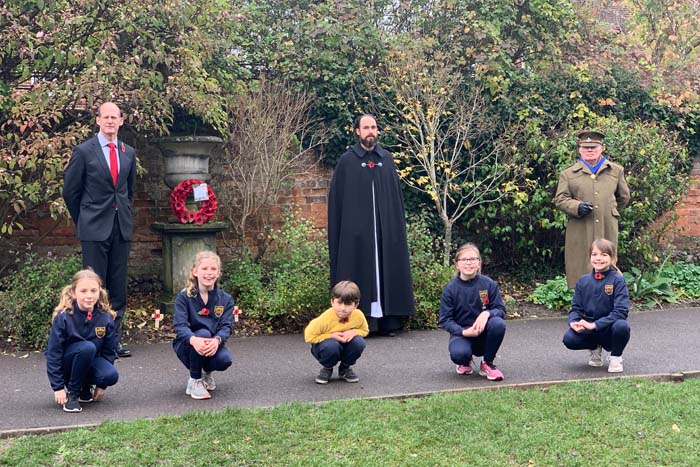 The children stood in silence while the Last Post was played, and a selection of Year 6 pupils spoke about why it is important that we remember and then recited the poems For the Fallen by Laurence Binyon and In Flanders Fields by John McCrae.

The school’s wreath was then placed by the Head of School and one of the youngest boys along with crosses which were placed by Mr Armitage, Father Jeremy and Mr Willoughby in the school’s Garden of Remembrance.

Mr Armitage said “ It is important that the children grow up understanding and remembering the sacrifices that others have made for them. I was incredibly impressed with the children’s respectful behaviour, and even our Nursery pupils stood in silence and clearly understood the importance of the occasion. Whilst COVID-19 has been restrictive in some ways for us as a school, we were pleased that we were able to find a creative solution here such that the Act of Remembrance was still able to go ahead, with the support of the Public Health and Children, Education and Families teams at Oxfordshire County Council.”

A number of classes spent some of their lessons on 11th November talking about the first and second world wars and the significance of Armistice Day. The Reception children watched a thought-provoking video about a rabbit on a World War 1 battlefield. They made some bright poppies and watched clips from the Remembrance Day ceremony at the Cenotaph where they enjoyed seeing members of the Royal Family and our Prime Minister lay wreaths. Their teacher, Mrs Brown said “The subject of war can be difficult if you are only 4 or 5, so we finished the morning looking at photos of happy people celebrating the end of the war. Then we celebrated ourselves with a street party style lunch where we listened to the song ‘We’ll Meet Again’ by Dame Vera Lynn.”

Afterwards Mike and Lesley then went to lay a wreath at the Great War Memorial at Townlands Memorial Hospital which was installed in 2018.  The memorial had been taken away earlier this year for renovation as there was damage caused by the water ingress and sunlight.  Street Furnishings of Wargrave who made the plaque originally remade the plaque at no expense and Dickie Way has helped make a new wooden surround. 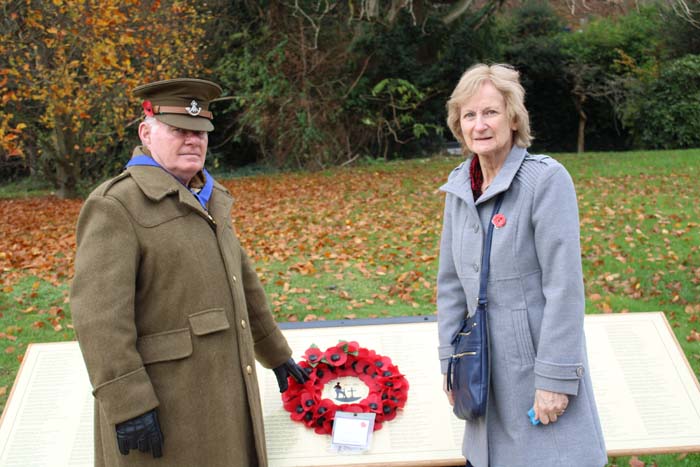