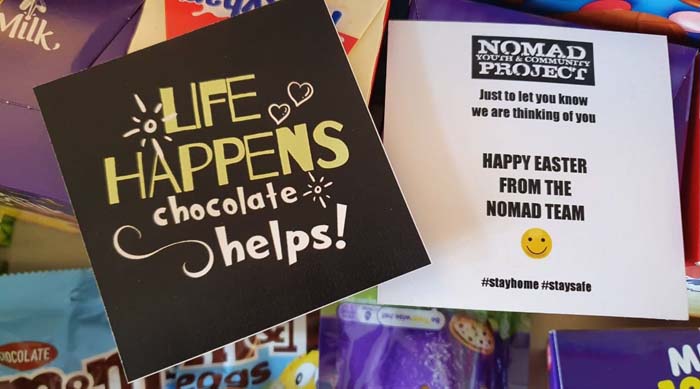 This year has been very different for many charities and Nomad Youth & Community Project based at d:two in Henley are no different.  They have seen a massive increase in the demand for their help mainly through the Henley Food Bank that they run.

At the charity’s AGM last night, Tim Prior, Team Manager at Nomad said, “This year we’ve had to adapt to the changing in needs and the food bank was a large focus for a few months from March to August.”  Between March and October the number of food parcels the charity delivered went up to 955 from 197 (a 385% increase) for the same period last year.  Tim thanked the volunteers who came forward to help deliver the increase in food parcels and added, “I’ve been blown away by the donations and people’s kindness.” In a video, Support Worker, Angela Face said, “One elderly gentleman was in floods of tears when we delivered an Easter egg, he said, it was the first he had an Easter Egg since his wife had died.”

The charity had to put on hold many of the support services which include face to face mentoring in schools, 1:1 support for parents, residential trips, holiday activities and weekly football groups.  Looking at new activities that would meet social distance guidelines, the charity invested in some stand up paddleboards and Tim and Angela received some training.  The new activity proved a hugely popular activity over the summer months with the young people.  Tim commented, “I was amazed at how many of them hadn’t actually been on the river, when they live in Henley.”

Once the skatepark re-opened, the Supporter Workers returned to their weekly visits there.  They noted that were some cannabis use and alcohol consumption. Tim commented, “Many wanted to chat to us and this led to 1:1 interventions.  In the last quarter we have supported 41, 16+ young adults.  3 of those have been supported to return to college, 1 has been helped to go to university and 3 have been helped to find suitable employment.”  Another video showed Lucy being interviewed who had received support and help from Nomad.  Lucy who on her first visit to Nomad, walked out of the door.  She returned to get help to go back to school.  She said, “Nomad gave me moral support with my personal feelings, physical support with tutoring as I was really behind with my work and helped with my emotions.  They made a massive difference.  She said she would tell others to give Nomad a chance.”

Headteacher Catharine Darnton was pleased to have the Nomad team return in September to restart their 1:1 mentoring.  She said, “We are so conscious that without Nomad we couldn’t do the things we do.  They are incredible and so important.  The Nomad mentors are part of the Gillotts Team.”  One bereaved student who is having mentoring told Catharine that talking to Tim was helping and it was the first time something was helping.  Catharine added, “On behalf of the Henley’s young people, I would like to say thank you.  Your work is priceless and its’ a great partnership.”

Chris Ward, Board Member of Nomad outlined fundraising initiatives for the next year with Nomad celebrating their 25th anniversary in 2021 and hope to raise £25,000 which will go towards a new 9-seater vehicle.

Amanda Ponsonby, High Sheriff of Oxfordshire attending the AGM for the first time after finding out about Nomad this year.  She said, “After watching a webinar in the summer about Nomad, I clocked it was something quite special.  As Tim always says the door is always open and I was impressed by the enthusiasm and fantastic feeling when I visited in August.  I loved what I have seen so far.  Tonight has consolidated all that.”

To keep up-to-date with latest news and what donations are needed for the Henley Food bank, go to their Facebook page https://www.facebook.com/nomadhenley

DJ Gary Boys is raising money for Nomad for Christmas through is request radio show.  For more details go to https://www.henleyherald.com/2020/11/11/dj-re-launches-radio-request-show-with-christmas-appeal-for-nomad