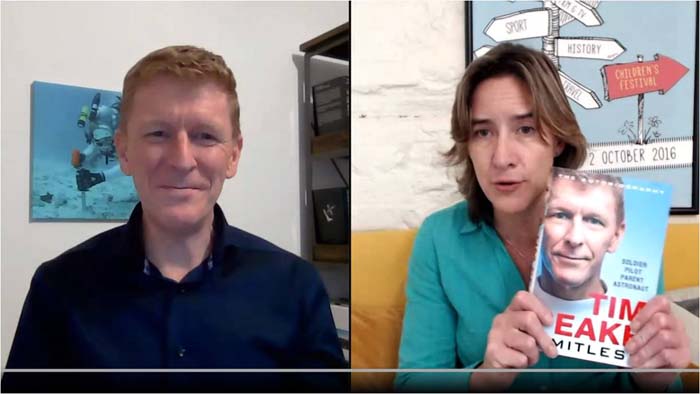 You’d think lockdown for astronaut Tim Peake would be a walk in the park or space?  Being interviewed by Dame Katherine Grainger on Monday for the Henley Literary Festival Tim replied, “Even though we’re trained to be in isolation it’s different and I found lockdown more stressful – dealing with family issues and homeschooling (his 2 boys).”

Tim was talking about his newly published autobiography Limitless which charts his life before becoming the first British European Space Agency astronaut and being launched to the International Space Station in 2015.

Tim’s first adventure challenge and one which describes as “best time of my life” and started him on his journey was an Operation Raleigh trip to Alaska at the aged of 18.

After leaving school at 18 he joined the Royal Military Academy Sandhurst and his first posting was to Northern Ireland. Describing the first weeks of training, Tim said, “Nothing can fully prepare you.  I was young, impressionable and they put their stamp on me.  The first five weeks they break you down to build you back up again.  I’ve drawn on those experiences later in life.  I look back fondly at that time.  The room inspections are comical – but only when it is happening to someone else!”

Flying helicopters was Tim’s first love and he went on to become an instructor pilot and test pilot.  He didn’t think when he was younger that he wanted to be an astronaut but when the ESA opened the doors for all member states to apply for astronaut selection, he decided to apply.  He was one of 6 Europeans chosen out of 8,000 to apply.  The selection process took a year to complete and included intellectual tests which Tim found hard.  He said, “Once the intensive tests were finished and the soft skills like leadership and communications skills were being tested I became more confident.”

What makes a good astronaut?  Tim replied, “I don’t know they don’t give you that feedback after selection. I would say that you need to be very passionate about what you’ve done.  We were all from a diverse mix of backgrounds e.g. engineers, school teachers but we I think we all had those soft skills like good communication, the right personality, could handle isolation and work as a team.”

Friday nights were Tim’s best time in space. He commented, “We were all allowed to have 10% of commercial food each and we would share this on a Friday night.”  His favourite Heston Blumental dish he created for Tim was the Sausage Sizzle Curry, which reminded him of his family camping trips in Scotland by the riverside.”

Space smells like a metallic burnt smell according to Tim but others may smell it differently.

Would Tim go back into space?  He replied, “Every astronaut is addicted to space.  It’s an incredible environment to live and work in.  Nothing can prepare you from being detached from earth.  It has a mind blowing perspective.  It’s very serene and calm floating in space but very intimidating.”  If he went back Tim would love to do a deep space walk, walk on the moon or an untethered space walk.