Henley Army Cadet Lance Corporal (LCpl) Natasha Bryant, put her First Aid skills into action when a passenger who was travelling on a bus began to have a seizure. She has been awarded with a Praiseworthy Certificate for her swift actions, this certificate is the highest level of recognition for First Aid in the Army Cadet Force (ACF).

Within the ACF, the Cadets undertake a variety of training, including First Aid. The cadets have opportunities to gain qualifications and skills to which are transferable in day-to-day life.

LCpl Bryant age 15, has been a part of the ACF for over two years and has recently earn herself a promotion. Back in February, LCpl Bryant was traveling on a bus with her friend when a passenger on the bus began to have a seizure. Natasha sprung into action, she moved other passengers out of the way, made the casualty comfortable and told the bus driver about the situation. Whilst the bus driver made a phone call to the emergency services, Natasha comforted the casualty, when he came around, he informed them that he had epilepsy and does not require further medical assistance. As the bus continued its journey, Natasha gave the passenger company until he had reached his stop.

In the Army Cadet Force such actions can be recognised by a National Praiseworthy First Aid Certificate. This is a rare award, where her actions were put in front of a committee to decide whether this award was fitting. LCpl Bryant was found worthy and was presented a Praiseworthy Certificate by Major Thrussell her Commanding Officer on a Virtual Parade.

The Praiseworthy citation read “LCpl Natasha Bryant was travelling home from school on a bus when a passenger suffered a seizure. LCpl Bryant managed the scene and moved other passengers away. She made the casualty safe, reassured him and updates the ambulance.”

Major Thrussell the Commanding Officer said “This award is very rare, it’s an honour to be able to present this. LCpl Bryant is a cadet that has stepped up and stepped out from the crowd. A massive congratulations on receiving this award” 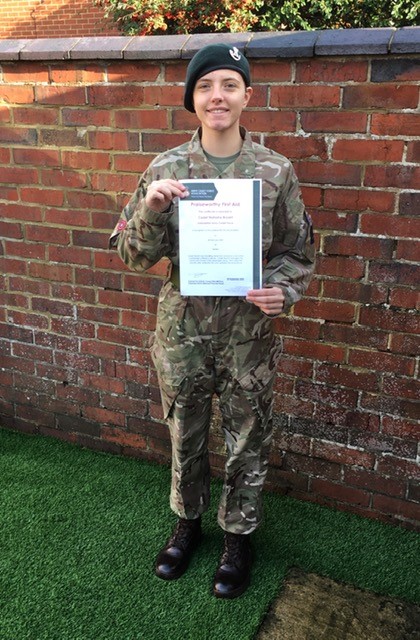 The Army Cadet Force is a national youth organisation sponsored and supported by the Ministry of Defence. For 12-18-year olds, designed to deliver challenging and varied training based on military themes and concepts. Henley Detachment at the Drill Hall in Friday Street & parade every Wednesday from 1900 to 2130hrs. We would love for new Cadets and Adult Volunteers to come visit us and experience something new, whether that is our virtual parade night or once we re-open for face to face training.  For any Henley Detachment enquires please email 2Lt Mel Haynes, 3360hayne@armymail.mod.uk