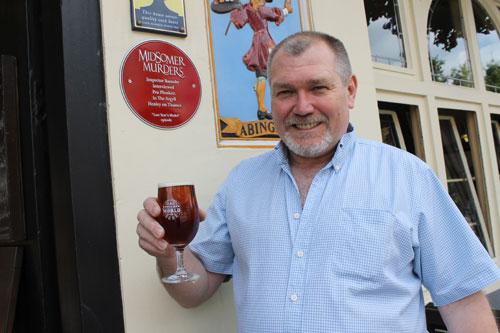 After 15 years at the helm of The Argyll pub in Market Place, Neil Ainsworth will be leaving the ship he’s steered so well next week.

Before moving to Henley in 2005 Neil managed bars and pubs in around London for 13 years.  Neil said, “Driving down the hill onto Henley bridge for the first time my immediate thoughts were, I don’t care what the pub looks like I want to live here!! Five months later we took on the tenancy of The Argyll pub in November 2005. The pub had lost its way a little, it was in need of being put back on the rails.”

Neil had never been to Henley before then.  He said, “I was living in Alice Springs in Northern Territory, Australia. I watched a race that had bottomless boats with people inside running down a dry river bed. They called it Henley on Todd. I had no idea what they were doing. It was the funniest thing I had ever seen. Crowds cheering, flags flying, the beers were flowing. Anyway a good day was had by all. When I started looking for a pub I saw Henley-on-Thames and did a little research the penny dropped. Ahhh, that’s what it was all about.  Not quite sure which is more comical? Alice Springs or Henley-on-Thames?”

Neil and his partner Claire looked at business opportunities from London to Exeter.  Neil explained, “We had some brilliant days out checking potential pubs. Claire was working in NHS in London so commuting for her was a consideration.  I was looking for a pub that we could build up, something that was at its lowest trading cycle with the opportunity for sales growth. I believe in pubs, the importance of them is known really by people who value them. My ancestors originated from Fort William on the west coast of Scotland, they migrated as early settlers in New Zealand. The name Argyll stood out. It seemed to be a good omen.”

The history of the pub was also an attraction for Neil.  The pub cellar has been dated back to the 14th Century.  The pub as it is now is Victorian.  Neil comments, “People were selling beer here for centuries before other continents were even discovered. What an honour to be part of that.”

On arriving in 2005 Neil heard mutterings from customers on his first day that he would never make it through the winter! Neil said, “My approach would be to softly re-establish The Argyll as a welcoming traditional pub, with realistic traditional core values and an enjoyable experience for our customers. Our focus was on well kept beer, good wines and tasty pub fayre in a comfortable relaxed setting. The Argyll has always had a pleasant atmosphere.  It is a good little pub in a super location in Market Place.”

In 2006 Neil and Claire married at St Nicholas Church in Remenham.  Neil comments, “I will never forget Father Martyn saying to me at the time that Henley was one of the few remaining UK market towns that still bred eccentricity. Today, I know what he meant.  The wedding reception was in the newly refurbished pub afterwards. Their daughter Fern was born two years later.

2006 was another great year for Neil as an episode of Midsomer Murders was filmed at the pub that year.  The episode, Last Year’s Model, featured The Argyll in a scene with Inspector Barnaby interviewing Pru Plunket at the bar. Neil explains, “Benson Productions came to see me at the pub. They discussed filming and asked how much I would charge for exclusive hire of the pub for the day. I thought of a number and doubled it, I was surprised and at the same time delighted they wanted to use the pub. I knew at the time Midsomer Murders had significance but did not realise how popular and far reaching it would become. They accepted my fee and the deal was done.  They filmed a few weeks later from 9.30am and wrapped at 5pm; we were open again by 6pm selling pints. It is probably the most profitable day the pub has ever had without selling a pint of beer! John Nettles and Jason Hughes were both very witty and good sports throughout the whole day’s filming. It was great fun.”  With a plaque above the bar and the creation of a Midsomer Ale, Neil worked with a local tourist agency and Henley Town Council to create a Midsomer Murders walking tour starting from the pub.

Business flourished and Neil enjoyed successful years with a growing food and drinks trade.  Neil said, “We geared up to take advantage of seasonal, climatic and local event opportunities. We harvested where we could and have always been a seven day week pub. I didn’t take on the pub for time away from it. We went from strength to strength. I enjoyed the community spirit, working alongside high street retailers, business people and fellow licensees in the town. Pubs and restaurants opened and closed around us.  We kept our offer simple and tried to do the simple things well. Of course, people will say it’s hard work running a pub.  I have never considered it work. It has always been a responsibility to me as custodian of The Argyll. We did make many sacrifices as a family along the way, my wife has been incredibly patient, I put the pub first perhaps a little too often.”

Neil employed many local full time, part time and seasonal front of house and kitchen staff over the years and he has enjoyed the company of many regulars and visitors. He said, “Thank you to each of you!!  We are grateful to all our locals and those customers who have travelled from all parts of the globe to visit Henley and enjoy the pub for a variety of reasons. There are many characters who have had a pint at the bar, past and present. I will miss the banter I am sure. We have been very lucky to have made lasting friendships with people who have supported the pub.  I was lucky too to meet Debbie Harry in the pub, who was my favourite female rock star as a teenager.”

Neil is not leaving because of Covid-19. He explains, “We are leaving now, not because we are failing, though more because we can. We will continue to live in town. Claire is working back with the NHS and Fern is at school locally.  I will take a month or two to decide what is next for me, I take a feast of great memories from our time at the pub. Thank you to all our valued customers, staff and others.”

We Want Your Roof!
Scroll to top