A group of local creatives are crowdfunding for a new short film, Screw The Pooch. Written by Henley-bred screenwriter, Amy Brandis, the film will be set in Henley and will feature a number of familiar faces in the cast and crew — a testament to the kind of talent based in the town. The team are calling for local support to raise £1,750 on Kickstarter, an all or nothing fundraiser.

Screw The Pooch tells the story of Kay, a young woman who returns home after her mother passes away only to find that Death is still hanging around for some unfinished business. The two become unlikely roommates in this quirky tale of loss and the tragicomedy of life. 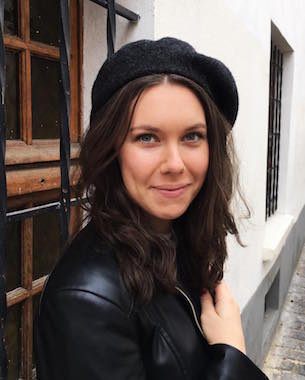 Screenwriter Amy Brandis is a recent graduate of the National Film and Television School, having previously studied Creative Writing at Warwick University. Though she already works as a script consultant, this film will be her directorial debut.

Speaking about the inspiration behind the script, Amy said, “I think the storyline is a reflection side effect of 2020, and comes from a very personal place. There were many times this year where death was experienced on a global scale which felt unprecedented, and in the same way in my personal life, loss was all around me. I felt at times like I was doing a dance with death, or a sort of continuous avoidance of further loss. Sometimes you cry, and sometimes you just have to laugh, and so this tragicomedy came out of a place of wanting to find power. By laughing in the face of our fear of loss, we empower ourselves.

Having grown up in Henley, it has long been a goal of Amy’s to make a film set in the town. Screw the Pooch, with its gothic themes of tragedy and loss, seemed to her to be perfectly placed amongst the landscape and the architecture of the area.

Amy was also keen to provide work for the local creatives for whom the pandemic has catastrophic effects. “This has been a very difficult year for our industry,” she explained. “It’s been very challenging on both individual freelancers and production companies, and I’m so looking forward to the opportunity to make work with local talent who absolutely have so much to offer the film world.”

One such local filmmaker is Amy’s own brother, Leo, who is the project’s Director of Photography. Leo, through his business Brandis Productions, has been building a reputation for himself as one of the most talented and driven young videographers in the area, (most recently having made a promotional video for the town in collaboration with Henley Town Council and The Creative Duck). Speaking about the collaboration with her brother, Amy said, “Leo and I have worked on film projects before, both creative and commercial, but this will be the first film of this kind that we will be doing together. I’m really excited that, as well as being a local film, this is a family film, and I’m excited to see how his technical experience and my story-telling experience can come together.”

Another familiar Henley face involved in the production is Nadia Lamin, the local actress whom many may also recognise from behind the counter at Spoon. Nadia will be taking on the lead role of Kay. Amy Brandis said of the casting, “I’m so excited to have Nadia as our lead. She’s exactly the kind of powerhouse actor to balance the tenderness and comedy of this story.”

In order to fund the intensive four day shoot, the team are raising money through Kickstarter. Their budget is just £1,750 — a micro-budget compared to the usual independent film minimum of £6,000 to £12,000. Currently, the film has only reached 30% of its crowdfunding goal, and with their ‘all or nothing’ Kickstarter (meaning that they must reach 100% to receive any of the funds), they are desperately in need of backers.

The film’s minuscule budget will go towards rental of film equipment (including cameras, lights and sound equipment), payment to the actors, and safety equipment to ensure that the set is safe for all involved. Amy explained, “One of the challenges, of course, is making a film in the time of COVID. We are ensuring at every stage that this is a COVID-safe production. Most of the time, story is a filmmaker’s number one priority, but this year it is safety.”

The budget will also cover admission fees for the 2021 festival circuit, where the film is headed next year. All backers of the film’s Kickstarter, no matter what the size of their contribution, will be given early access to the film before it hits the festival circuit.

In a year which has seen such widespread trauma, Amy Brandis hopes that Screw The Pooch will be just the film to encapsulate the collective feeling of grief and provide closure. Perhaps it may even bring a little light to the fear of death, which feels ever-present in our day-to-day life. “I hope that it’s going to appeal to a wide audience because as much as this year has been very different for everybody, it’s also a moment where we have been in the same boat,” Amy said. “I hope the people watching this are going to find a bit of catharsis, really, in facing off the losses we’ve had this year together.”

To support these tenacious local filmmakers in the making of Screw The Pooch, you can donate via their Kickstarter, and follow their Instagram for updates on the production.