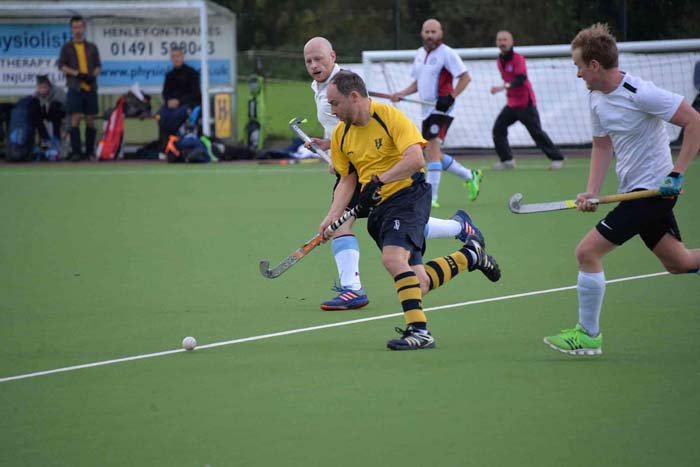 Henley Mens 3rd XI made a welcome return to competitive hockey on Saturday afternoon, following a 4 week lockdown induced break. They came into the game having had no opportunity to train during the hockey hiatus, so they lacked a little sharpness, but this was little cause for concern, as for most it was a welcome return to sport.

In spite of the mid-season break, Henley started with intent and dominated the early exchanges, and with their Coach, Jeremy Clarke, orchestrating the team from the sidelines Henley looked to build from the back and control the play.

The always sensational Price was in fine form, linking up with the other midfielders of Roberts, Marshall, Cheesman and Harmer to feed the forward line. Leading scorer, Holloran, went close on a number of occasions, as did others in the forward line, including Brown, Barrass and Cottam who all sought to test the opposition keeper. Henley continued to press throughout the first half, but were unable to find a decisive goal.

OMT also sought to push forward when on the ball, however the Henley defence held firm, with Peachey and Nicholson, ably supported by the indomitable Newbold, thwarted the advances made by the OMT team. Even when OMT did manage to break through the lines, Henley’s keeper, Grocock, was on hand to make some fine saves. The teams therefore couldn’t be separated at the break and it was goal-less at half time.

Both sides started brightly after the interval, although it was OMT who came out of the blocks with more desire and they sought to regain control of the midfield and apply pressure on the Henley goal.  Henley also continued to push forward when in possession, but it was OMT who finally broke the deadlock with a breakaway goal.

A frustrated Henley side sought to restore equality and continued to create chances, but they failed to convert them and it was OMT who then scored a second, in spite of continued Henley pressure.  Captain Nicholson’s Amber and Blue army are not a team to retreat and they continued to keep faith in their system and apply pressure on the OMT defence. It was one such attack that earned Henley a short corner, which was sharply finished by the dependable Holloran with just over 5 minutes remaining.

The OMT team were focused on maintaining their advantage and strived to shut Henley out for the rest of the game. With a minute left it appeared they had been successful, but the persistence of the Henley forward line earned Henley a final short corner in the dying seconds of the game. It was left to Roberts to try and earn the home team a point for their hard work. His shot was fired towards the OMT keeper, but such was the ferocity of the strike, the keeper was only able to deflect the ball into his goal and the umpire signalled both a goal and full-time, with the score finishing 2-2.