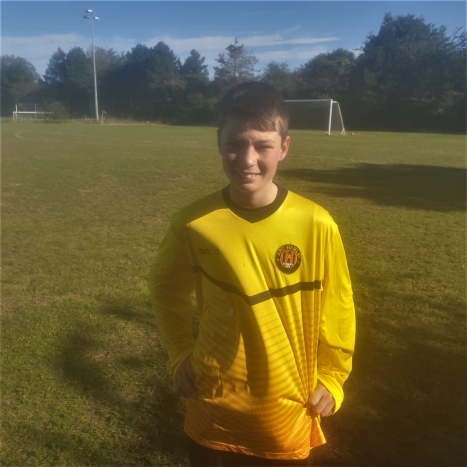 The U14 AFC Henley Hurricanes notched up a superb 3-1 away victory at Ascot to propel them to fourth in the League table.

In what was a tight match the visitors started brightly. A long ball from the back by Joe Turner seemed to have been dealt with by the Ascot defence as the ball was passed back to the keeper. However, an ever alert Harvey Herbert was alive to the situation as the back pass fell short of the keeper. A brave tackle by Herbert on the keeper saw the ball balloon into the air and Herbert was fastest to react as he coolly let the ball drop before slipping it into the net despite a desperate goal line clearance by an Ascot defender.

Finnbar Scott had to make a great tackle to stop a goal scoring opportunity for Ascot down their right. Tom Bonser was also at his tenacious best as he kept the dangerous looking Ascot number 10 in his pocket.

Matthew Dippenaar has made the full back position his own and looked comfortable on both the left and right, making key interceptions and combative tackles.

Tom Atkinson, playing in a slightly deeper role than normal broke from midfield and let fly from 20 yards out only to see his effort well saved by the Ascot keeper as the Hurricanes went into half time 1-0 to the good.

This lead did not last long though as Ascot were gifted an equaliser soon after the break.

At 1-1 the match could have gone either way. It took a fine save by keeper Ben Horner to keep the scores level. With the ball fizzed at him from close range, it seemed to have beaten him. Miraculously though he somehow clawed it back and kept it within his grasp with the Ascot front line bearing down on him as he proved what an invaluable asset he is to the team.

This was to be the turning point of the game as the Hurricanes pushed on for the 3 points. Sam Archibald broke down the left and after some good interplay with Christian Rowbotham slipped the ball to Joe Winpenny. Winpenny’s quick feet were too much for the Ascot defence in their penalty area and with the home defence scared to make a tackle he passed the ball to new signing Jasper Quinnell. Quinnell was to make an instant impact and show what a shrewd signing he was. He hit a great half volley that was destined for the bottom left of the goal before an Ascot defender got a block on it. Striker Rowbotham though showed what an instinctive knack he has for finding the back of the onion bag as he curled a deadly accurate effort into the bottom right of the net to make it 2-1 to the visitors.

Man of the match Tom Yeoman was showing how versatile he was as he interchanged between centre midfield and centre back seamlessly. Anything that came his way was either headed, tackled or cleared with the minimum of fuss and the greatest of efficiency.

Centre back partner and sweeper Joe Turner was also having a great game as his deep lying positional awareness and reading of the game meant that he was able to clean up anything that did get through.

Oliver Saunders, playing in a holding midfield role, was able to dictate the play and set up the Hurricanes’ attacks whilst affording the back line a protective shield.

Henry Mendelssohn, in his familiar number 10 role, was key in setting up a number of Hurricane attacks and helped to run the clock down as full time approached with some clever play in the corner.

In the dying minutes Herbert was fouled in the Ascot penalty area and he dusted himself off before firing the penalty into the bottom corner of the net to make it 3-1 at the final whistle.

Managers Turner and Atkinson were said to be over the moon by the result and now felt the team were ready for their biggest challenge of the season against unbeaten and top of the table Maidenhead next Saturday.