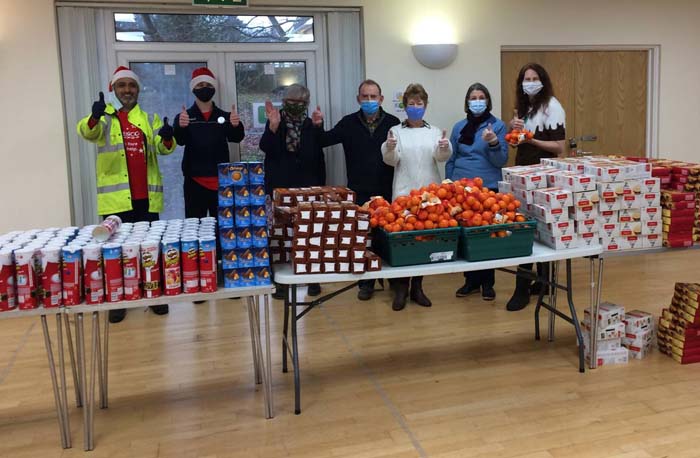 The Lions were pleased that this annual initiative could take place this year.  The parcels included 25 items including store cupboard essential items such as tea, coffee, jam, cereal, soups etc. plus some festive treats including Pringles, mince pies, satsumas, Quality Street, Christmas pudding and mince pies.

Lions members, socially distanced (except for quick photo above) used the YMCA hall to pack the parcels up which was given free of charge and Tesco delivered the groceries which were bought with donations from organisations, businesses and individuals.

The recipients are a combination of elderly, alone, single parent families and others in need. Referrals come from local surgeries, Citizens Advice, And SOHA. They also have an historic list which is annually updated.

Lions Secretary, Dave Murray said, “These parcels are important in many ways not only as financial help but in the case of the elderly and alone, as a cheerful face who may stop for a chat, although of course this couldn’t happen this year because of the virus. Tesco were very helpful and to be congratulated for their efficiency.”