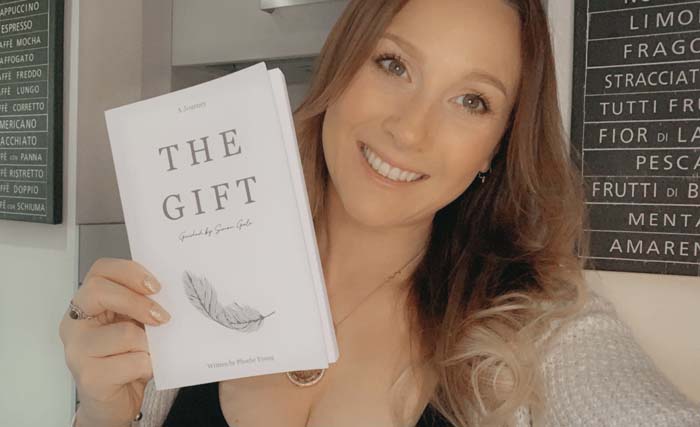 Phoebe Young who writes our Grief Blog has recently published a new book The Gift in which she wrote her father’s (Simon Gale’s) journey in the last three years of his life after being diagnosed with terminal cancer.

Simon, was the founder of Southern Plant and Tool Hire who died in 2019 at the young age of 59, leaving wife Sue, daughters Phoebe and Niamh and sons Murray and Robson.

After losing her Dad, Phoebe wanted to share all the things that he’d taught her and the wisdom he shared about embracing life as it is and immersing yourself fully into the moment.  She said, “Life is full of gifts, if we take the time to notice.”

The book, written as if Simon wrote it himself starts with him talking about his love of cooking and particularly Italian food and his new business venture the Heart Kitchen, a cookery school he started before his cancer diagnosis.  The book goes on to tell Simon’s struggles with telling his children he had terminal cancer, the endless hospital appointments, scans, chemotherapy and a new diet.  After telling his children his diagnosis Simon said, “We shouldn’t project anger on to my cancer.  If we do that we are only making it stronger.  It will feed off our negativity.”

Throughout the book, Simon shows his strength and motivation to keep on living and shares his reasons. One of the biggest motivations was after Phoebe’s son Leo was born in February 2016, Simon’s first grandchild and the special moments he shared with him.  Simon described the moment he was born as, “Wow, just wow!  Children are such a gift they come into this world with such light.”  He was also blessed with seeing his second grandson Gabriel born too in 2019.

In between the chapters, there is a poignant quote.  We particularly liked “Time has a wonderful way of showing us what really matters.”

The book ends with a final word from Simon which includes “Do everything you want, everything you desire, do it all, whilst you still can,” and his recipe for ragu and fresh tagliatelle.

The book is available from Southern Plant in Station Road for £5 or from Amazon for £6.99.