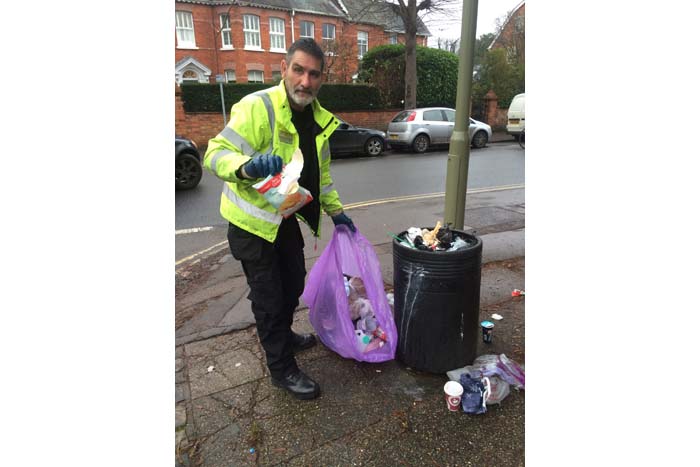 Councillor David Eggleton, Deputy Henley Mayor, resigned form Henley Residents Group political party last night at the Town & Community meeting after he felt that many of his fellow HRG Councillors were not listening to his expertise and knowledge about waste in Henley.  He will now continue to serve the town as an independent Councillor like Councillor Lorraine Hillier.

Councillors recommended a proposal to replace all 22 bins in the town centre with larger cast iron heritage-signed bins at a cost of over £18,000 instead of refurbishing the existing cast iron bins and replacing the cast aluminium bins at a cost of around £6,000.  The second option was removed from the committee’s agenda.  The committee also voted on approving the trial of two solar compactor bins located outside Cook in Duke Street and next to the Angel on the Bridge.  The cost of the six month trial would be covered by The Henley Society and a County Council grant.  After the trial the cost going forward for these bins would be £200/month and £150 for any call-outs for the bins to be fixed.

David said, “I think the report was misleading and taking out the option of refurbishing is not democracy.  I have the knowledge and expertise around waste and they are not listening to me.”  He urged all Councillors not to just read the bin report but to go out and actually survey the bins themselves before voting.  He added, “I think a proper survey over 6 months should be carried out on which bins are overflowing and where we need bigger ones. This can be easily done by asking the bin collector to do this, but after we are out of this pandemic. I don’t think it’s the right time to do any trial as there is much more takeaway rubbish at the moment.  The other thing we need to address is residents fly tipping their household rubbish in the town’s public bins.  I’ve caught people on lots of occasions doing this.  I’ve resigned because a few of the HRG Councillors are making me uncomfortable to work with them.”

Chair of the Town & Community Committee Sarah Miller said, “We could go down the refurbishment, but I believe that the bins have come to end of their life. We could be talking about this again in a year’s time.”

Henley Mayor Councillor Ken Arlett had completed a survey with Councillor Eggleton and agreed with him at the time about some of the bins being refurbished.  However at the meeting he told members that after reading the report he thought that the bins should be replaced.  He did though recommend that the installation cost of £1500 should be reduced by 50% and that the carriage to deliver should be waived by the supplier.  This was included in the recommendation voted for.

County Councillor Stefan Gawrysiak said, “The new solar bins are 10 times the capacity of the normal bins.  If they don’t work for us, we can have them removed at no cost.”

It was agreed at the Waste Working Group that the large recycling bin outside Starbucks would be removed and the area properly cleaned.

Councillor Will Hamilton put forward a 5 member motion to ask for the trial of the solar bins to be discussed again at Full Council after the trial was recommended and resolved at this Committee.  Councillor Lorraine Hillier was part of this 5 cross-party member motion.  She said, “There is not enough information to support this trial and it is a bad time to do it.  It wouldn’t reflect the ‘normal’.”