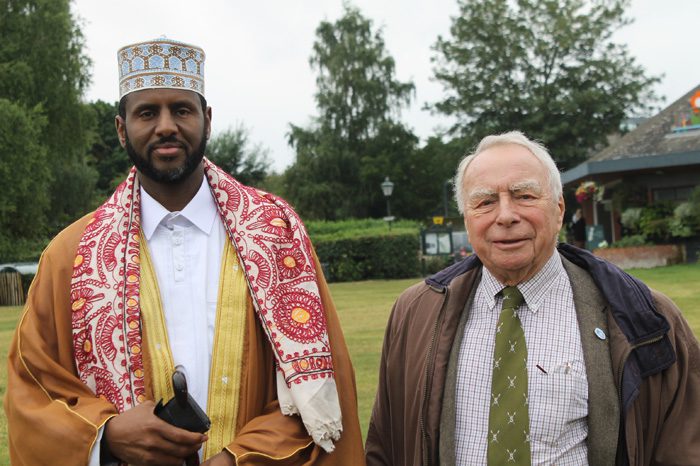 I am sending the condolence to Brigadier Malcolm Page. We are so sorry to hear that Malcolm has passed away 12 Jan 2021. I am sending my condolences to his younger sister Yvonne Meachen and Queen Elizabeth, Prince William, and all children of the Queen Elizabeth, Prime Minister of United Kingdom Mr Boris Johnson,  Mayor of Henley-on-Thames, people of Henley, Henley Councillors, Henley Town Manager (Helen Barnett), Henley Clerk and all his family, friends, comrades, Royal Commonwealth Ex-service league, Royal British Legion’s Henley and Peppard branch, colleagues who had served in Somaliland protectorate. I am sending all the condolences to Brigadier Malcolm Page.

I and the people of Borama city had sadly to hear that Malcolm Page was passed away. This condolences is also sending to Malcolm, the mayor of Borama and the councillors, elders, veterans and all the Borama city people.

From 1940s to 1951, he worked for British Protectorate, British Somaliland scouts. Soldiers who fought for the crown. In 1982 he established the Association and link which was the Henley Borama twin towns. Also attending was town councillor, Jane Smewing and Brigadier Malcolm Page, of Ancastle Green, Henley, who founded the Henley Borama Friendship Association in 1983 finally.

He visited in Borama 1993  and was made very big ceremony and great welcome him and his delegations to Borama city. He was distressed at conditions of some his (ex-soldiers) the veterans.

When I heard that Queen Elizabeth in 2017 had given Brigadier Malcom an award I was delighted and honoured that Malcolm asked us to accompany him to share what was a terrific and wonderful experience.  I congratulate him on this very deserved and fitting award for all the work he has done for the Somaliland veterans. Thanks for the Queen.

Brigadier Page founded the link after visiting Borama in 1982 and early efforts included fund-raising to renovate a power plant in the city.  The town held its first annual Borama Comes to Henley event in Market Place in 2014 and this was repeated in 2016, 2017 and 2019. It was called off in 2018, because Borama was hit by a tropical cyclone.

Commitment helping Somali veterans who had fought for the British Crown. He also led fundraising campaigns to help improve schools, hospitals, and infrastructures. It was this that led him to found the Henley-Borama Friendship Association in 1982.  Over the last few years, Brigadier Malcolm has organized the annual event Borama Comes to Henley when a colourful contingent from the Anglo-Somali community gather on Mill Meadows with their joyful demonstrations of traditional Somali singing and dancing. To celebrate the town’s friendship with Borama in Somaliland, with Borama families now living in the UK coming together to showcase the richness of their culture through performances of music, dance and poetry.

The Henley Borama Friendship Association has collected together art and crafts from Borama to celebrate the rich and vibrant culture of the Horn of Africa. Borama’s population retains a huge enthusiasm to build a solid future for the next generations. It has established three universities over the last 20 years and is one of the main providers of further education in the region. Come and find out more about this fascinating region!

Cllr Alan Jones proposed and Henley Town Council agreed that a friendship link should be established with a third world town. Borama was eventually selected and in 1982 Mayor Dr Noel Snell visited Borama and presented a framed scroll formalizing the link.

Over the years Henley and its residents have supported, both financially and practically, various initiatives in Borama, from road building, creating electricity infrastructure, medical aid and education. Henley has also welcomed numerous delegations from Borama and enjoys support and interest from the Somaliland Diaspora in the UK.

When he joined the Somaliland Scouts as a junior officer after the Second World War and committed his life to helping Somali veterans who had fought for the Crown in the former British protectorate, veterans who live in Borama city were really sorry when I tell them and they mentioned the support they received from him.

I was the Councillor who started to to work with him from 2014 until 2018 for receiving support money to the veterans, and the communication and to strengthen and develop the twins towns, Borama and Henley and the Association of Borama Henley Friendships Association.

I was the contact person of Borama and Henley.  I want to thank Mayor Ken Mayor of Henley-0n-Thames who was the only and first person that I received the e-mail from the death of Brigadier Malcolm Page thanks a lot I hope you will be like Malcolm’s position for the friendships of Henley And Borama.

I am very glad to get Mr. Ken and so sorry to miss Brigadier Malcolm Page.  Please Mr. Mayor Ken say our sorry to all people of Henley, Councillors, colleagues, and his sister Ms. Yvonne and her daughter.

I am so sorry for the death of Brigadier Malcolm  Page

A tribute was aired on Borama TV.  To watch go https://www.youtube.com/watch?v=qfQ1nPKd25g&feature=youtu.be