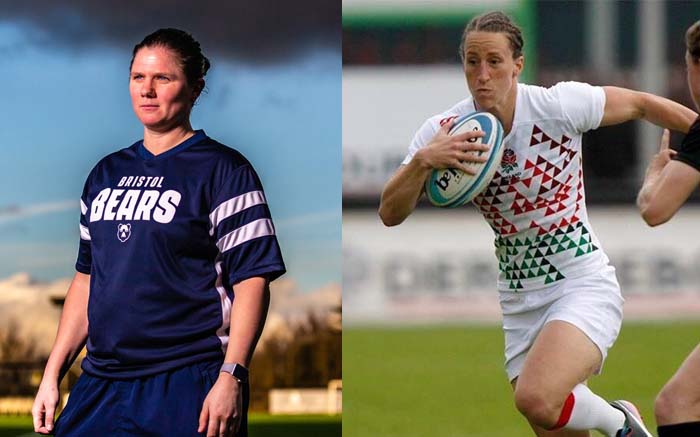 The Henley College and Ealing Trailfinders are delighted to announce that former England rugby players Kat Merchant and Kim Oliver have been appointed to manage the College’s Girls’ Elite Rugby Programme.

Both coaches will also be managing the Ealing Trailfinders women’s academy at Brunel University. The duo, who have over 100 caps for England between them have been recruited to work together to build the foundations of the women’s academy programme alongside that of the men.

Kat who won the World Cup in 2014, scored a remarkable 44 tries in 58 appearances for the Red Roses on the wing. She had a nine-year spell for the national team after making her debut in 2005, and played for her country in both the 15s and 7s formats of the sport. Kim played in two World Cups for England in 2006 and 2010 at inside centre, and gained 43 caps. Since retiring from international rugby in 2013 she became Head Coach of Bristol Bears Women, adding significant coaching experience to her CV.

Satwant Deol, Principal and CEO of The Henley College said “The Henley College is absolutely thrilled and delighted with the appointments of such a high calibre talent and experience to coach our Women’s Rugby Programme.”

Non-executive director at Ealing Trailfinders Rosie Williams is thrilled to welcome both on board. “Ben and I have been through an exhaustive recruitment process and had some fabulous candidates. Kat and Kim were the stand outs and we are really pleased to have them to help drive
our academies based at The Henley College and Brunel University London.

We are working from a blank sheet so it’s great to have two excellent coaches who are really keen to be involved in our programme from the very start. They will bring not only fantastic coaching skills, but also in depth understanding of what it takes to be a world class athlete and the system
that athletes need to support them.”

Kim said: “This is a brilliant opportunity to be in at the beginning of what I think will be a great asset to the development of the women’s game. I have known Kat for a long time and we played together so I really look forward to working with her.”

Kat added: “Kim and I have different styles but our coaching philosophy is very similar, we expect all players no matter their talent to work hard to be the best that they can be. I’m really looking forward to working together and believe that we will complement each other as we build an athlete centred, challenging, fun environment that will get the best out of the players that we have access to.

We both know the challenges of having to end our rugby careers early due to injury and we see the balance of education and rugby as the right mix within the Trailfinders system.”

Ben Ward, Director of Rugby at Ealing Trailfinders sees this as a huge statement for the club. “I’m really excited about these appointments. Kat and Kim both impressed me through the interview process and I’m looking forward to them working alongside myself and the other coaches at Ealing Trailfinders to make the best holistic system for both men and women we can.”

Ealing Trailfinders is committed to creating a world class hub for Women’s Rugby and has recently announced a significant scholarship fund for both The Henley College and Brunel University London, which is available for talented and aspirational rugby players.

For more details and to apply for the Girls’ Elite Rugby Programme at The Henley College, then please email Tom Redfern via tred@henleycol.ac.uk or visit https://www.henleycol.ac.uk/sport/elite-sports-programme/girls-elite-rugby-programme/

Love Me Do – Valentine Message to Pupils
Scroll to top