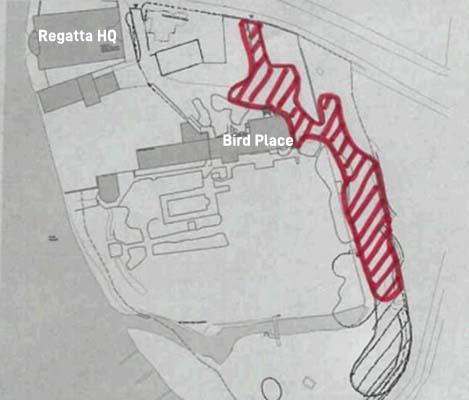 The property is listed and is in a conservation area.  This is the second time an application has been submitted for this, the last one was in June 2018 when it was refused.

With the application, evidence was provided that the site had been used for parking for more than 10 years (as required) by Courtiers who pay for and park employee cars there and a neighbour at Rose Cottage.  Since 2017 Courtiers have paid for up 22 vehicles to be parked there.

The owner applied for a lawful certificate for the whole area of their driveway but aerial image evidence submitted by Pegasus Planning on behalf of Remenham Parish Council showed that parking has not been occurring across the whole site for ten years.

The Planning Officer’s report stated, “What is clear from these images is that, while there was an access track running the full length of the site in 2003, this was not formalised hardstanding. In any case, this is not visible by 2009. It appears that formalised hardstanding did not reach the full length of the driveway in 2009 – which is the closest image before 06/11/2010. This appears to still be present in 2010, but the driveway has only been completed in its current form since 2017.  It is therefore considered that on the balance of probability parking could not have been regularly and consistently occurring on all the land within the whole site area applied for over the ten year period.”

Both Remenham and Henley Town Council recommended that the application be refused.  Planning Officer for Henley Town Council Jodie Rhymes said,  “The application to introduce and extend commercial parking in the curtilage of this residential house would put additional pressure on an already busy entry to Henley with frequent traffic queues and would impact on traffic flow within the Town Centre. This development would harm the existing environment and have a detrimental impact on the Conservation Area.”

David Whitehead Chair of the Henley Society said, “We are concerned by this application to introduce and extend ‘commercial parking’ in the curtilage of a residential house in the Henley Bridge Conservation Area. In addition to the harm caused to the environment, there would be an adverse effect, due to the entry to and exit from the parking area, on the flow of traffic over Henley bridge.”

The Planning Officer recommended that a certificate is granted but a smaller area than that outlined in the application, as shown on the plan above.  Full details can be viewed here

We contacted the owners for a comment but we didn’t receive a reply.