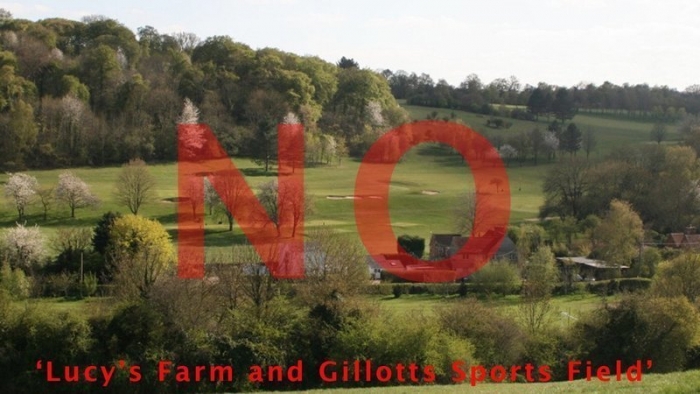 Three Henley residents have launched a campaign to save Gillotts Sports Field and Lucy’s Farm from housing development.

Gillotts sports field is a site that was allocated 50 homes in the Joint Henley and Harpsden Neighbourhood Plan (JHHNP) which was adopted in April 2016.  There has been a delay in progressing the site due to a restrictive covenant on the access over the bridleway to give access to the site.  A draft agreement is now in place with all parties.  There is a further agreement needed to gain access over a copse area.  Money from the sale of the land, hoped to be between £10-20m would be used to improve the sporting facilities with all year round pitches, renovate the school buildings and a purpose built school hall.  In October the school made a presentation to the Neighbourhood Plan Committee who are reviewing the plan asking for an increase in the number of houses from 50 up to 100.

The proposed development at Lucy’s Farm is for 100 homes on this site with access via 53 Blandy Road which has been bought by Bloor Homes.  They are working with Gillotts School on access to their proposed development.  The proposal includes 40% affordable and they told the Neighbourhood Plan Committee that they would discuss requirements for social housing.  The focus would be on family housing. AECOM who carried out a survey for the Neighbourhood Plan Committee in 2020 on housing sites said in their report that this site does not conform to the South Oxfordshire Local Plan 2011 as the site is adjacent rather than within the built-up area. This site was included in the sites put forward for the 2016 JHNNP but was not included as it was the one of the least supported sites in the public consultation.

Domenic Bertelli, Christine Wright and Justine Hutchinson who are behind the campaign said, “At a time when conservation is evermore in the public forum and eco-diversity being championed by so many, the threat to develop these beautiful green sites is in direct contradiction of that. It would have a devastating effect on wildlife as well as the landscape. All modern science indicates that open green spaces are essential to people’s well being, and that we should be conserving what we have.”

“Fortunately, people are realising that Gillotts sports field and Lucy’s Farm cannot be seen separately, and must be considered as one. If Bloor Homes are granted permission to build on Gillotts field it is the gateway to the Harpsden Valley; indeed, it is their only way of accessing Lucy’s Farm. They have stated “ there is marriage value between the sites which could be accessed via a shared entrance from Blandy Road.”

A very large amount of the community are already hugely worried about the current level of traffic, pollution, our overstretched services and the existing infrastructure. The result of these developments would only make all of these concerns far worse. There are 180 houses at Highlands Farm and a further 180 at these sites are proposed. 360 houses would result in at least 720 cars!”

It seems that almost everyone agrees there is a need for more social and realistically affordable housing in our town. We believe this should be a priority of the neighbourhood plan, and that they should be looking at many of the brown sites on the plan to achieve this. The government recently issued a document stating preference to building on brown field sites and converting shops and businesses, which have become vacant due to our present circumstances, into residences.

There is no doubt in the community that Gillotts School needs refurbishing and updating. However, why aren’t the governors and all elected representatives lobbying for more Government funding?”