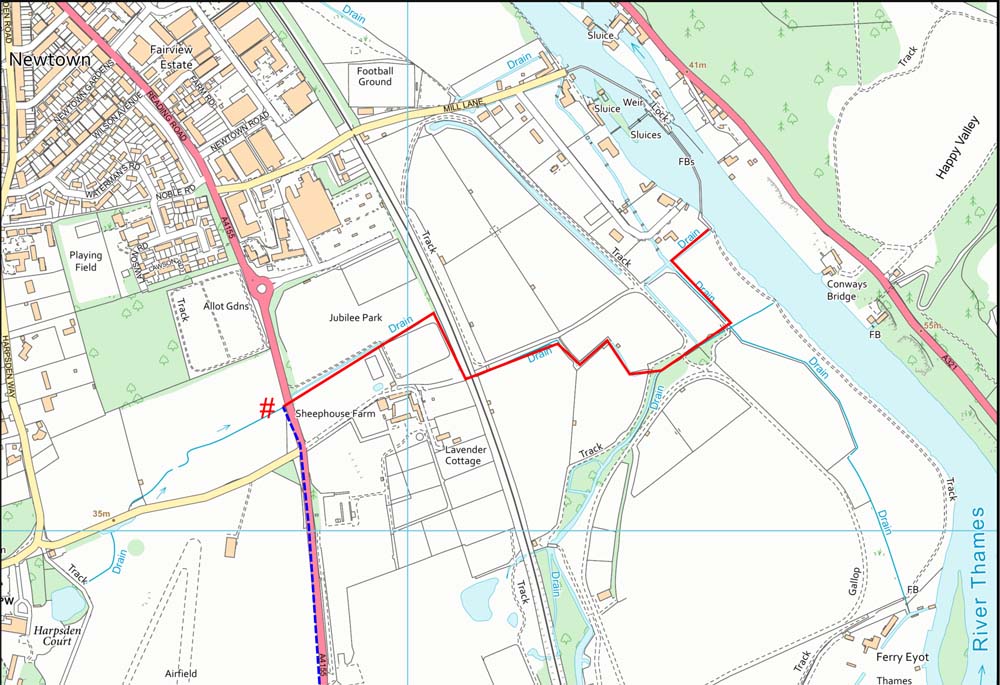 Members of the Thames Farm Action Group (TFAG) held an online meeting with Taylor Wimpey last week to see the latest proposal for the drainage solution from the site.

The new proposal will see a piped system go along the Reading Road towards Henley, then turn off down land adjacent to Sheephouse Farm (near the new Bremont HQ) and out onto a watercourse next to the sports pitches at Jubilee Park next to Tesco.

Enzygo Environmental Consultants have completed a Flood Risk Appraisal and Drainage Study for Taylor Wimpey which outlines the new proposal.  In the study, it states “a new outfall to the Northern Watercourse would have a negligible risk of flooding to sports pitches and grass land, and remove uncontrolled surface water runoff from the site which otherwise could impact nearby properties and the capacity of the foul/highway drainage networks.”

In October last year, Taylor Wimpey submitted a planning application to take the surface water from the site through pipes running along Reading Road to Station Road, down Station Road to Mill Road, along Mill Road to junction with Mill Lane where it will discharged into the Lashbrook.   Shiplake Parish Council objected to the new drainage scheme, stating, “It (Lashbrook) frequently overtops its banks, even during periods of low rainfall, rendering the adjacent land water-logged and flooded as it serves as an integral component of the functional flood plain. Our concern is that the addition of further inflows into this watercourse will only seek to increase the frequency and impact of such flooding events.   The Enzygo report states “An outfall to Lashbrook would introduce additional flows to the Thames, upstream from Shiplake and could exacerbate existing/known flooding issues.”

In 2015 Trevor Howell, Chair of AFC Henley complained about the the Town Council Parks Services dredging the River Harp which feeds in from Northern Watercourse saying that the ditch created would be a danger to players and spectators and the piles of earth left didn’t leave enough run off space for players. Trevor Howell this week said, “I suspected this a few months ago when I was asked by a surveyor if he could have access to the ground to carry out a topographical survey of the River Harp. He wouldn’t divulge the name of his client. I told him that Henley Town Council was responsible for the river and referred him to the Town Clerk.”

“There will be an increased risk of flooding if another source of water is added to the natural one. There is also a child safeguarding issue for us at AFCH if the water level rises substantially. Most of the time there is very little water flowing, but heavy rain can quickly turn it into a full-flowing stream that is very deep in parts due to the dredging.”

A property owner on Sheephouse Farm has written to Henley Town Council stating, “It is admitted in the Enzygo executive summary that this proposal will result in an increase in extent of flooding to my and neighbouring properties.  The Enzygo proposal has been made without any consultation with myself or other affected property owners. We already lie in the flood plain as do the adjacent sports fields which would also be at increased flood risk. Normal development in this area would be under strict control, if allowed at all, to prevent any increase in flood risk. Therefore, it cannot be sensible or acceptable to pump water from a development over 1.5 km away and simply discharge it into an area already at high flood risk.”

In the Enzygo report there was a third option – Outfall to North-East Watercourse Network. This option has been discounted by Enzygo as unfeasible due to the requirement for 5m deep drainage to allow a gravity fed system. The property owner added, “I challenge this conclusion as the alternative rising main proposal along the Reading Rd to Northern Watercourse and pumped S104 outfall is also not gravity fed. The route to the North-East Watercourse is also the shortest, involves least disruption to road travel during construction and to a large extent follows the natural surface water flow patterns. It is stated in the Enzygo report that the North East Course network is in third party land which is not accessible. This statement is incorrect and misleading. I have made contact with the owners of the relevant land who tell me that they have already offered access but have not received a response from the developers, Taylor Wimpey.”

Peter Boros, Chair of the TFAG said, “This is very welcome news indeed on the face of it and should remove what was the threat of increased flooding within the Village as well as the disruption along Station Road and Mill Road that this drain would otherwise have involved.

The foul drainage proposals which include the enlargement of the extant pipework in Station Road all as previously approved is not referred to in the documentation we have seen hence we assume those proposals remain unchanged. We are analysing the rest of the information particularly that which relates to onsite works and grouting of the site and any impacts on the aquifer and have requested further information from Taylor Wimpey in that regard.”

Chair of Harpsden Parish Council, Kester George declined to comment on the proposal.  Henley Town Council Officers are working on understanding all of the facts with the relevant stakeholders.  The Town Clerk is preparing a report for the next Finance Strategy & Management meeting next Tuesday (9 March).