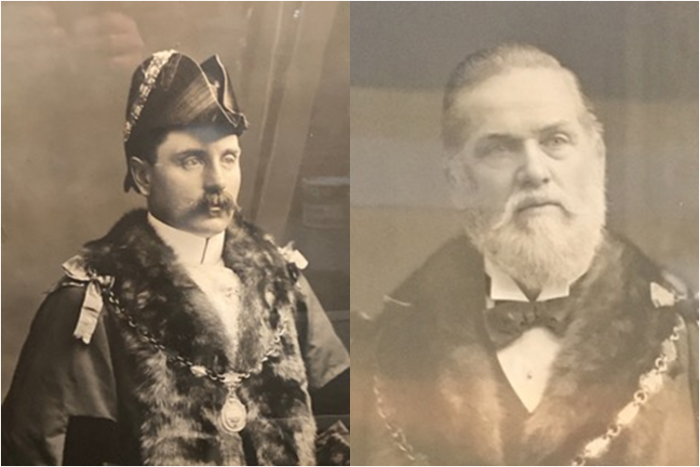 Chairman Geoff Luckett, and with a welcome from Executive Committee Member Catherine Notaras was attended by The Mayor, Councillor Ken Arlett and an estimated audience of 85.

Michael, a historian living in the town, teaches at the Department for Continuing Education at Rewley House in Oxford, and has spent lockdown researching the history of Henley. His fascinating talk entitled ‘Alderman and Mayors:- life in Henley before the first World War’ was both well researched, professionally delivered, and enjoyed by all.

Michael was inspired to join the Society when he read of its project to restore the Victorian Terrace house name signs in 2019/20.

Michael drew on the photographs of the town’s Mayors in the Town Hall and on private collections of photographs showing the town as it was. He said that municipal government was the main way to alter the life chances of ordinary people in Victorian and Edwardian times.  A string of Liberal mayors took the initiative from the start of elected local government in 1883. Henley was changed out of all recognition, with clean water, modern sanitation, straightened and widened streets, a new commercial centre, a southern suburb of terraced houses along the road to Reading, and a new Town Hall. Bad housing for poorer people in the centre was improved. The boundaries of the borough were also extended creating a ‘greater Henley’. Michael described how the rapid pace of change was reflected in the politics of the town.

Two key figures he highlighted were Charles Clements, a builder and leader of the Liberals on the Council, and William Anker Simmons, of the firm of estate agents, valuers and land agents and leader of the Conservative group. Both had great energy, and their collaboration got things done. Simmons was a rower, who had taken part in the Royal Regatta, and he led the way in the 1900s towards a new emphasis on the modern town as an ‘inland resort’ and commuter centre.  There was increased emphasis on leisure facilities; and greater awareness of the importance of conserving Henley’s unique Thames Valley setting. Michael concluded with an appeal for the conservation by private owners of the historical records of that time.

Sadly, due to a technical hitch, the talk was not recorded but Michael is keen to share details with anyone who missed the occasion and he can be contacted by email on michael.redley@appleinter.net.