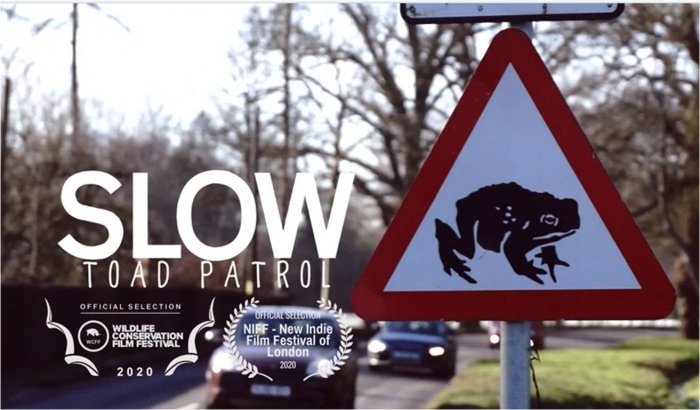 Henley Toad Patrol volunteers are from all walks of life from teaching assistants, a photographer, a baker, to an author and model but they all have one thing in common and that is the love of conserving toads, frogs and newts.

The Slow: Toad Patrol which premiered on Saturday night on YouTube followed the Toad Patrollers in 2019, from setting up the barrier in February, to picking up the frogs, toads and newts and carrying them across the Marlow Road from the Oaken Grove Wood on the Culden Faw estate to the pond in the grounds of Henley Business School.  The film was made by Chris Suddaby and Ernesta Gemple and originally was a micro-documentary about a local wildlife conservation effort.  Chris explained, “The film then blossomed into a 31-minute short film about this group of volunteers, their co-ordinator, their passion for this cause, and their personal reasons to take part in saving thousands of toads each year.”

Angelina Jones, who heads up the Patrol started volunteering a couple of times in the late 80s and has been properly involved since 2000. Angelina throughout the film gives a fascinating insight into the amphibians including the fact that toads only return to spawn in the pond where they are born.

John Sumpter, a Professor at Brunel University who moved to Henley from Harrow in 1998 started to get involved and since 1999 has kept the data on how many of each amphibians have been collected each year.  He said, “It’s good to understand whether the population we are saving is increasing or decreasing and what impacts this.”

Volunteer Ben said, “It’s good to have camaraderie and it’s great for mental health.  It’s not just about saving amphibians – it’s helping the environment and helping yourself.  Volunteer Millie added, “It’s like one big family and it is my most relaxing time of the year.”

Angela commented in the film, “It’s something we give up our Saturday nights out for.  It’s important to help others and that includes wildlife.”

There are many Toad Patrols around the UK.  The Henley Toad Patrol is the busiest in the UK with 7,000 toads collected in 2019 which included 2,000 on just one night!

If you missed the live showing, you can still watch the film at Slow: Toad Patrol