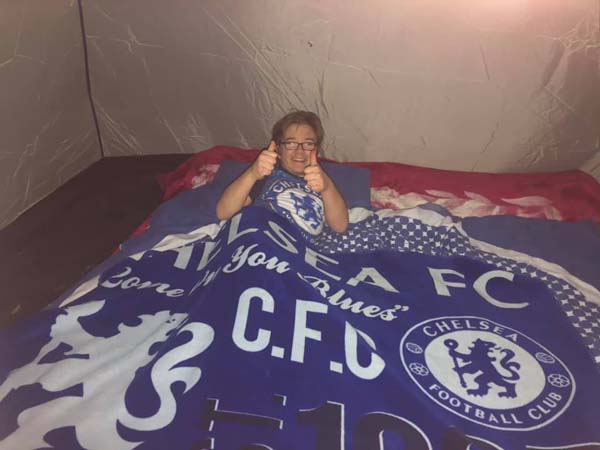 Chelsea fan Ben Sleet set himself a big challenge last weekend to take part in the Big Virtual Stamford Bridge Sleep Out 2021 to raise money for the Oswald Stoll Foundation who do fantastic work with homeless veterans.

For 11-year-old Ben, this was quite a difficult challenge as he has Spina Bifida and because of this he has never been camping before.  Ben camped out in a tent in his garden with his Dad and slept on a mattress from their spare room bed to make him comfortable.  Above the blue tent he attached his Chelsea flag.

Ben said, “I did it because my Grandad used to be in the Royal Green Jackets and I’ve met lots of army soldiers at Stamford Bridge and I love talking to the Chelsea Pensioners there too.  I think we got to sleep about 11 o’clock as it was really blowy and cold.  We kept hearing banging noises.”

At 3.30am, Ben woke up and his Mum Angela then showed him a message (see below) from his favourite Chelsea player, Marcus Alonso.  Ben commented, “I haven’t seen him for such a long time (over a year).  I was really happy and it was really special to get a message from him.” 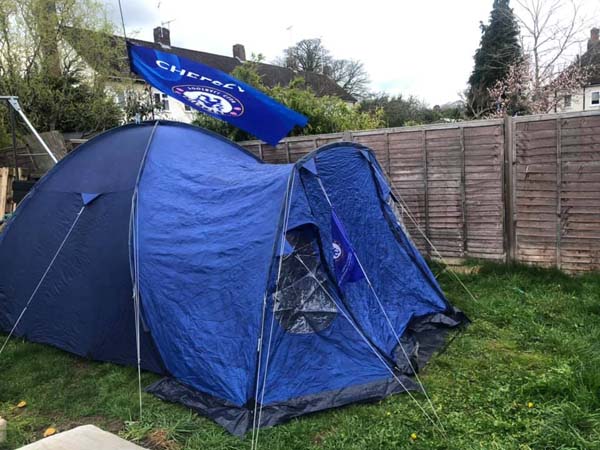 Ben targeted himself to raise £100 for the charity and has already raised more than double than that – £285 (including Gift Aid).

Ben’s Mum Angela said, “Luckily we still had the tent from when we went camping before Ben was born. I think it was amazing for Ben to do it.  It was quite hard for Ben to do as he’s quite heavy to lift into the tent and we still had to do his normal bed time routine.  It was lovely as he had a real good laugh with this Dad.  I’m very proud of him for doing it.  He just loves Chelsea and would do anything for them.  He particularly loves Marco Alonzo so it was very special when he got his message.”

Asked whether Ben would like to do more camping, Ben replied, “I don’t think so!”

Ben is looking forward to getting back on the Henley skatepark in his new purpose-built wheelchair and training for his next WCMX wheelchair competition.