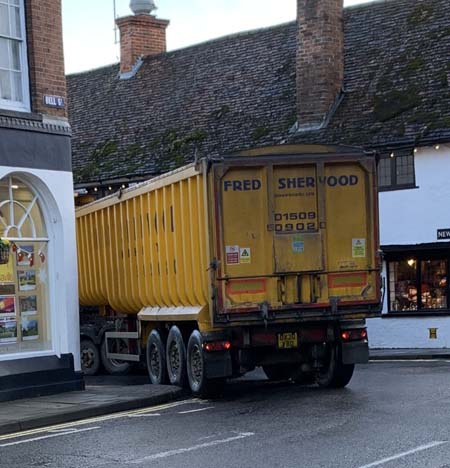 The first stage towards introducing a 7.5T environmental weight restriction limit to stop HGVs cutting through Henley was voted for by Oxfordshire County Councillors at an extraordinary County Council Meeting on Wednesday this week.

Henley’s County Councillor, Stefan Gawrysiak tabled the motion with the amendment (in bold) by Councillor Hibert-Biles “For the Director for Environment and Place to complete the necessary studies for an environmental weight restriction for Henley in the event that funding to cover the whole cost is secured through development and/or by local communities, businesses and town/parish councils and would not fall on OCC.”  The motion received 40 votes for, 3 against and 15 abstentions.

The motion was due to be tabled at a meeting on 23 March but the meeting was halted after an emotional motion was discussed on review of domestic abuse funding when some Councillors spoke about their own experiences of this.

In his speech before the motion was voted for, Stefan outlined the three grounds on introducing an environmental weight limit in Henley.  The first is to protect our historic buildings, the second the safety of our pedestrians as many HGVs mount the pavements and the third the air quality in the town.  He said, “Henley has been an Air Quality Management Area for 18 years.  We have 18 years of data which record the High levels of pollution in Henley. Recently we installed with the help of South Oxfordshire District Council a particulate monitor. All of these sensors show pollution levels higher than World Health Organisation levels.  In December we exceeded these limits 22 days out of 30.”

After the meeting Stefan said, “This is a huge achievement for me and the group of campaigners led by Amanda Chumas, Tony Fox, Sterl Greenhalgh and David Dickie. Great thanks must also go to Michaela of the Henley Herald who started the petition which has reached 3000. At county formed a coalition of all political groups to get this through.”

“It is major milestone in our campaign to limit through HGVs. I want to stop HGVs using Henley as a rat run, I want to keep them on the strategic Highway network. ANY HGV legitimately delivering to Henley will still be allowed in. So supply to Tesco, Waitrose and Sainsbury will be allowed BUT ASDA lorries who do need to come through Henley will be stopped. I want this ban to protect our natural assets and limit the effects on young, old, Mums, Dads and children. In doing this we will make Henley an even better place to live.”

“Henley Councillor Ian Clarke wants to welcome HGVs into Henley, I do not. I also think that a night time ban misses the point because it is during the day that lorries pollute and create the poor air that people breathe. I want a 24hr 365 days a year ban on through HGVs.”

“This is the beginning whereby OCC have the mandate now to do the studies and introduce the TRO which limits HGVs. It has taken 3 years of hard work to get to this successful point.”

Tony Fox, Henley’s HGV Watch Principal Campaign Coordinator said, “On behalf of the Campaign to introduce a 7.5 tonne weight limit for through traffic in Henley I would like to express our thanks to Councillor Gawrysiak for his work in getting the motion to conduct the required studies passed at the meeting of the Oxford County Council on 7 April 2021. This is a major hurdle that the Campaign has overcome and offers great encouragement for the Campaign members and the nearly 3,000 people who signed their names to the petition calling for this ban.

“We hope we are able to continue working closely with Henley Town Council in the future towards achieving this objective. However, the Campaign recognises that there is still much work to be done and so we encourage residents to continue sending photographic and other evidence of incidents involving HGVs in Henley to our dedicated email address henleyhgvwatch@gmail.com We believe that the evidence and testimony that has been given to date has succeeded in convincing a very large majority of OCC councillors that the problem experienced by both Henley residents and visitors is a significant one requiring urgent action.”