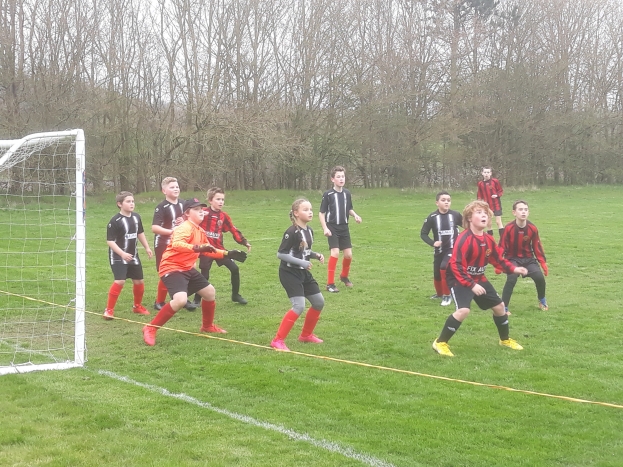 The AFC Henley Hurricanes U10s’ first home fixture of the year was against the Maidenhead Diamonds at Jubilee Park. The teams met on an overcast morning, but the Diamonds had soon raised the temperature. They had the best of the early exchanges, and one of their strikers cut through the home defence to score with a powerful strike from the edge of the box. The Diamonds continued to put the Hurricanes under pressure. However, the Hurricanes changed the flow of the game, with opportunities for Dominic Ellis, Nicolas Hernandez St Clair and Oscar Robinson. Jack Callaway and Oscar Robinson combined well upfront, allowing Oscar Robinson to shoot from a narrow angle. The momentum continued to ebb and flow, and the quarter ended with a free kick which was well defended by Dominic Ellis and goalkeeper Harrison Carpenter Buckett.

The Diamonds kept up the momentum in the second quarter, again breaking through the Hurricanes’ defence but shooting narrowly wide. Soon after, Jack Tookey made an important block, tracking back to cut off a dangerous looking cross. Both teams were starting to pass the ball well. For the Hurricanes, Will Lindsay was working hard on the left wing, both in defence and attack, and this led to opportunities for Luca Currie and Shiva Vadhoolan. The Diamonds continued to pose a threat, but defender Will Goulden was alert to any danger. The second quarter ended in the same fashion it started, with the Diamonds creating a good chance but shooting just wide.

The third quarter began in competitive fashion. The Diamonds continued to create goalscoring opportunities, being quick on the break. Jack Tookey was again needed to defend, and one Dominic Ellis clearance ended up in stuck in a tree – to be rescued by the referee later. Chances also came for the Hurricanes, with a fierce Will Goulden shot well saved by the Diamonds’ keeper, and the same player shot into the side netting following a fast break from midfield.

The Hurricanes started the final quarter with an early goal, a good ball from Dominic Ellis finding Oscar Robinson, whose pass to Will Lindsay allowed him to shoot past the keeper. Man of the Match Will Lindsay and Oscar Robinson continued to work well together, with Nicolas Hernandez St Clair persevering on the edge of the box. An unfortunate injury to one of the Diamonds’ players left them short, and so a hasty loan arrangement saw Will Goulden join the Diamonds for the remainder of the game. He appeared to enjoy his stint, posing a constant threat on the right wing and even scoring a goal from close range. However, it was Jack Callaway who had the last word, building on some typical Oscar Robinson perseverance to fire home from the edge of the box.

The game was very competitive throughout, with both teams showing skill, strength and determination. The Hurricanes move on to their next game, another league fixture away from home.