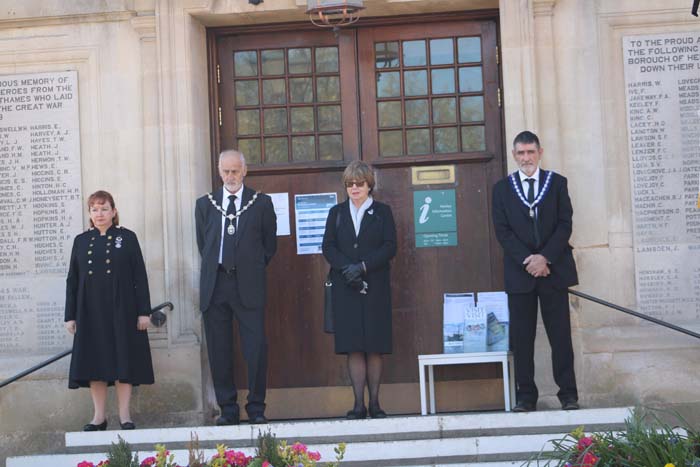 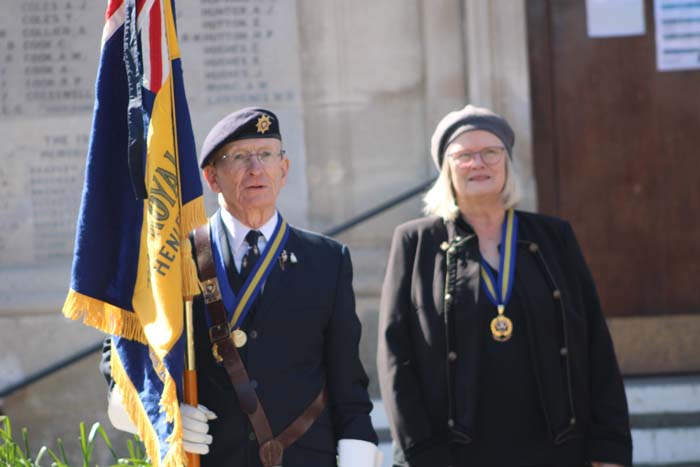 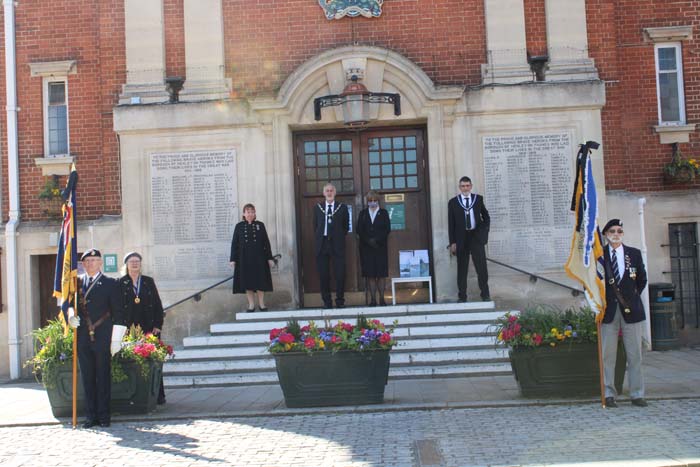 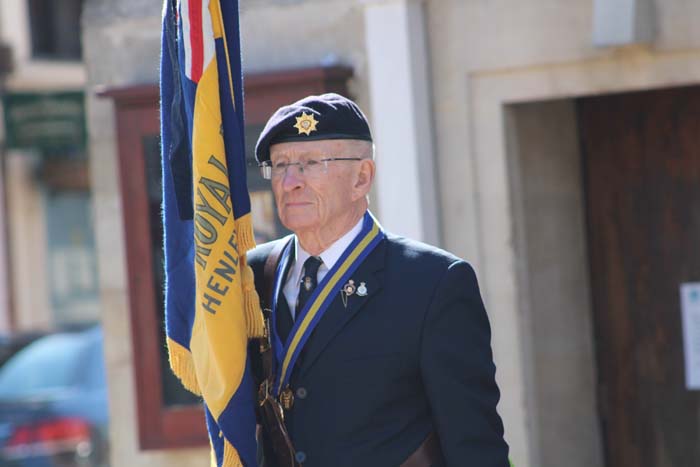 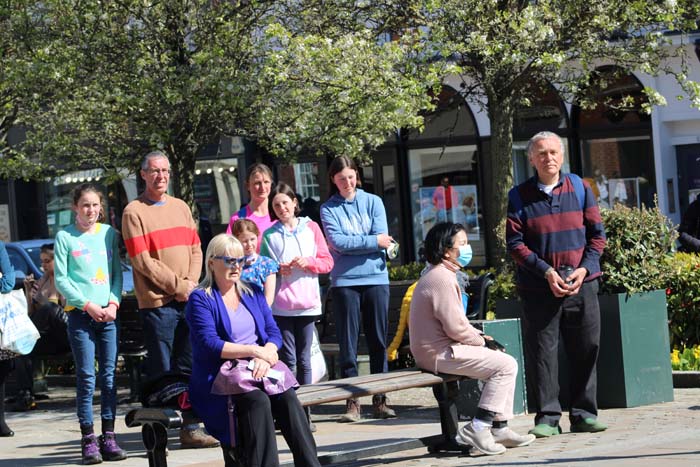 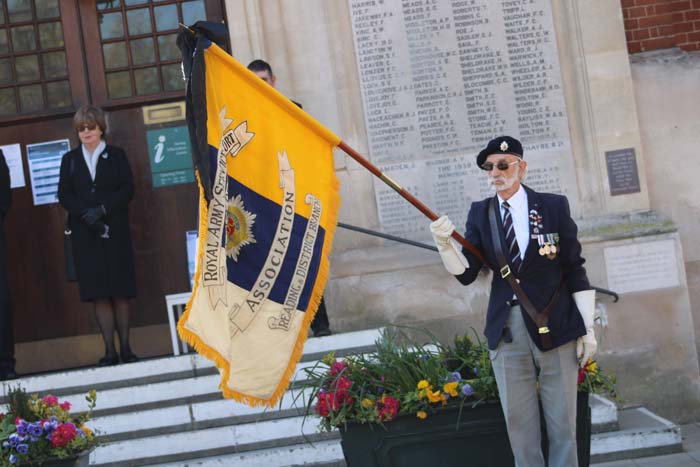 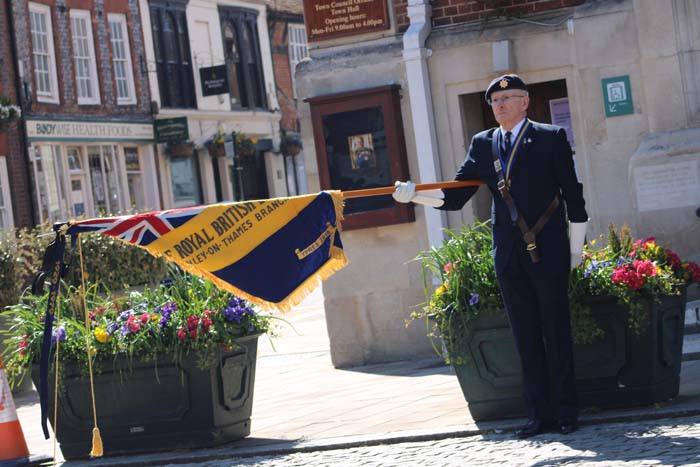 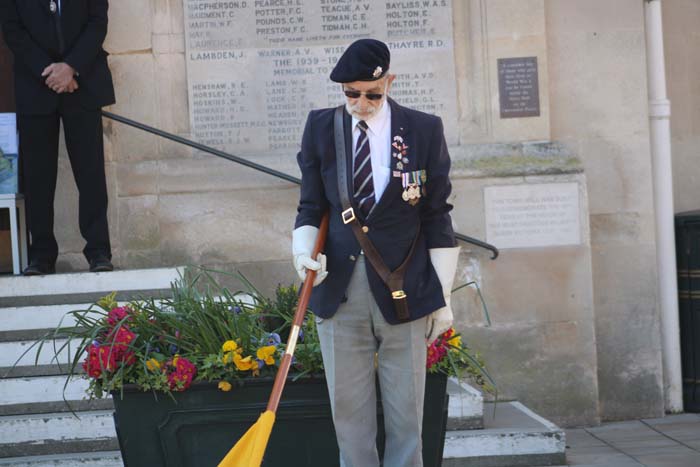 The town marked and paid respect to the passing of the HRH Prince Philip, the Duke of Edinburgh on Saturday and joined the national minute’s silence at 3pm.

In the sunshine, people gathered and those seated at the cafes in Market Place grew silent to pay their respects.  After the silence there was a round of applause.

Lynda Atkins, Deputy Lieutenant of Oxfordshire afterwards said, “Prince Philip’s service to the Queen and the whole country was just astonishing.  I honestly don’t think there has been anyone quite like him or will be again and so marking his passing is really important and I’ve been really impressed by how the Town Council have done this today.  It’s not big or showy, it’s just dignified.  I’m extremely pleased to see the Royal British Legion here.”

John Green, President of the RBL Henley & Peppard Branch who carried the standard said, “There is no question on a day like this, which is not only a very special but a unique occasion marking the passing of the Duke of Edinburgh who really, the one more reflects on his long life the more one respects his qualities.  There were many of them of course, his active service, his sense of duty, his love of family and more than anything his sense of humour.  He was one of the people and we are not going to see someone like that for a long time but I’m delighted to be representing the Royal British Legion and the people of Henley to mark the occasion as well as we could under the circumstances.”

Henley Mayor, Ken Arlett said, “As Mayor it was my honour to share the one minute’s silence on the Town Hall steps with members of the Royal British Legion, Deputy Lord Lieutenant Lynda Atkins, Deputy Mayor David Eggleton and the Mayoress, in remembrance of His Royal Highness Prince Philip the Duke of Edinburgh. On a beautiful sunny afternoon, at 3pm, the people in the Market Place all stood to acknowledge Prince Philips dedication and service to our Queen the Nation and Commonwealth.”

Deputy Mayor, David Eggleton, added, “It’s a great honour to show respect to someone who served our country and for all the things that he has done.  It’s a privilege to stand on these steps to mark the passing of this great gentleman.”

Regina Kusuma and John Parsons who were visiting Henley from East Sussex said, “We think it is part of history.  So touching.  It’s an end of era.  We saw signs saying about the ceremony and we thought it was important to come.”