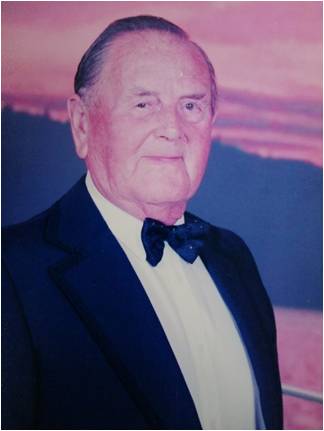 Derek was born in Clarence Road, Henley on 26 April 1927 and moved a year later to Niagra Road, Henley.   After finishing school Derek worked for Melletts on Reading Road where he trained and worked as a Baker.

Being one of the first Cadets in the Sea Cadets when the Henley group was formed in 1942, in 1945 Derek signed up to the Royal Navy and trained as Officers Cook.  He served in the Pacific from 1945 to being demobbed.  Derek returned to work at Melletts until he joined Huntley & Palmers as a cake decorator.  As well as decorating wedding cakes, Derek was one of the decorators of the Queen Elizabeth II Coronation cake.     In 1970 Huntley & Palmers relocated that part of the company to the Liverpool area and Derek took redundancy.  He returned to Melletts for a short time, finally working for Waitrose as Section Manager before retiring, through ill health.  Although his association with Melletts continued, helping out at busy times and cake decorating until Melletts closed.  Derek was well known in the local area for his cake decorating skills and was asked to give talks regularly at the Henley Grammar School and Henley Technical College.

Derek met his wife of 69 years, Doreen, in 1945 whilst at a fair in Henley.  They married on 21 July 1951 and had 4 children.  After his redundancy from Huntly & Palmers Derek continued to produce wedding cakes with the help of his wife Doreen.  Doreen made the cakes and Derek iced and decorated them enjoying orders not only from the local area, but London, one being transported to Australia.  Derek and Doreen both enjoyed seeing the world, but especially cruising in later life, their last cruise being in 2017 to celebrate their 90th birthdays.

Derek had a passion for football, he played football for Henley AFC in his younger days, and was a founder member of Newtown Football Club.  He also played and Captained for Wargrave FC.   He was a Reading FC season ticket holder and witnessed many of their major games with big teams, he also made their 100-year anniversary cake in 1971.

Derek suffered a stroke at the age of 56 and subsequently became a member and joined the committee of Henley Stroke Club, which helped him immensely.  He really enjoyed his years with the Stroke Club and only left in Jan 2019 when he broke his hip.

Derek will be sadly missed by his wife Doreen, his children, Christopher, Janice, Ian and Karen, his daughter-in-laws, Jenny and Lorraine and son-in-law Derek, 11 Grandchildren and 16 Great-Grandchildren.

Derek’s funeral will take place on 26 April 21 and his ashes will be interred at the Fairmile Cemetery at a later date.  We are accepting donations to the Stroke Association on Derek’s behalf, either contact Tomalin & Son, 38 Reading Road, Henley on Thames or make payments via https://dereklaye.muchloved.com.