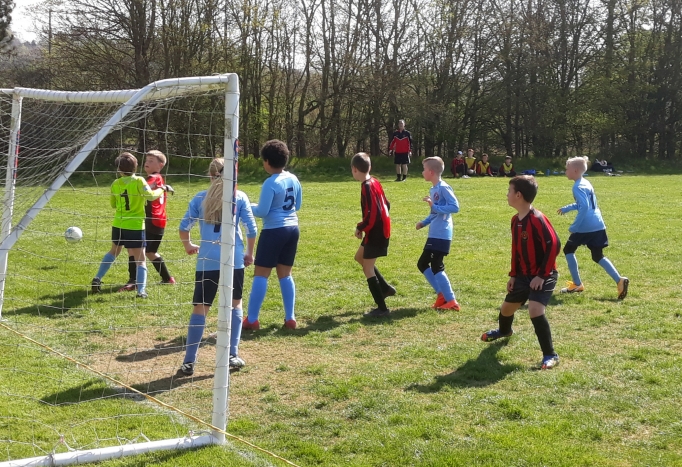 The latest league game for the AFC Henley Hurricanes U10s was a home fixture against the Bracknell Arrows U10s. The game was played on a splendidly sunny morning, the clear blue sky matching the blue of the Arrows kit.

The match began under bright sun, and soon the Arrows were pointing the way. They were well organised in defence and quick and strong up front. The Hurricanes slowly found their feet. Will Lindsay and Jack Callaway both worked hard, persevering in attack to try and find a way past the Arrows defence, yet tracking back to defend when necessary. The Hurricanes’ best move came from a long throw in by Dominic Ellis which found Oscar Robinson who passed to Jack Callaway, but the shot was a straightforward save for the Arrows’ keeper.

The Hurricanes began the second quarter at gale force. A smart passing move on the left wing between Luca Currie and Oscar Robinson set the tone. Oscar Robinson was creating chances up front, but the Arrows were keeping it tight at the back. They were also quick on the break, Will Goulden alert to extinguish one move. The Hurricanes kept creating opportunities, which eventually paid off. A well-placed corner from Shiva Vadhoolan was loose in the box and was steered into the goal by Nicolas Hernandez St Clair. This seemed to galvanise the Arrows, who put the Hurricanes under a period of sustained pressure. Goalkeeper Harrison Carpenter Buckett was tested twice in quick succession, making the save both times. The quarter ended with the Arrows having the upper hand and the Hurricanes in defence.

The change of ends brought a change in fortune. The Hurricanes started well, Shiva Vadhoolan’s pacey move on the left wing from the restart setting the tone. An accurate ball from Dominic Ellis in defence found Will Goulden, whose chip over the keeper passed narrowly over the bar. Another Hurricanes move saw Will Goulden pass to Jack Callaway, who found Jake Thatcher in front of goal. The Arrows continued to pose a threat on the break, but the momentum had changed and the third quarter ended with the Hurricanes on top.

The final quarter saw the Arrows redress the balance, putting the Hurricanes’ defence under pressure. A move down the left wing allowed the Arrows to find the target, leaving the defence behind to shoot across goal. The Hurricanes quickly found a response, Oscar Robinson, Will Lindsay, Nicolas Hernandez St Clair, Jack Callaway and Luca Currie finding space for some good passing moves in the Arrows’ half. Man of the match Dominic Ellis again demonstrated his long throw ins to good effect, and was still a calm presence in defence when the Arrows were able to break. The pressure told with the Hurricanes winning several corners and attacking the Arrows’ goal.

The game was very evenly contested, with both sides having periods of dominance. Both goalkeepers played well, and were tested by the opposition strikers who were at times moving the ball skilfully and at pace.