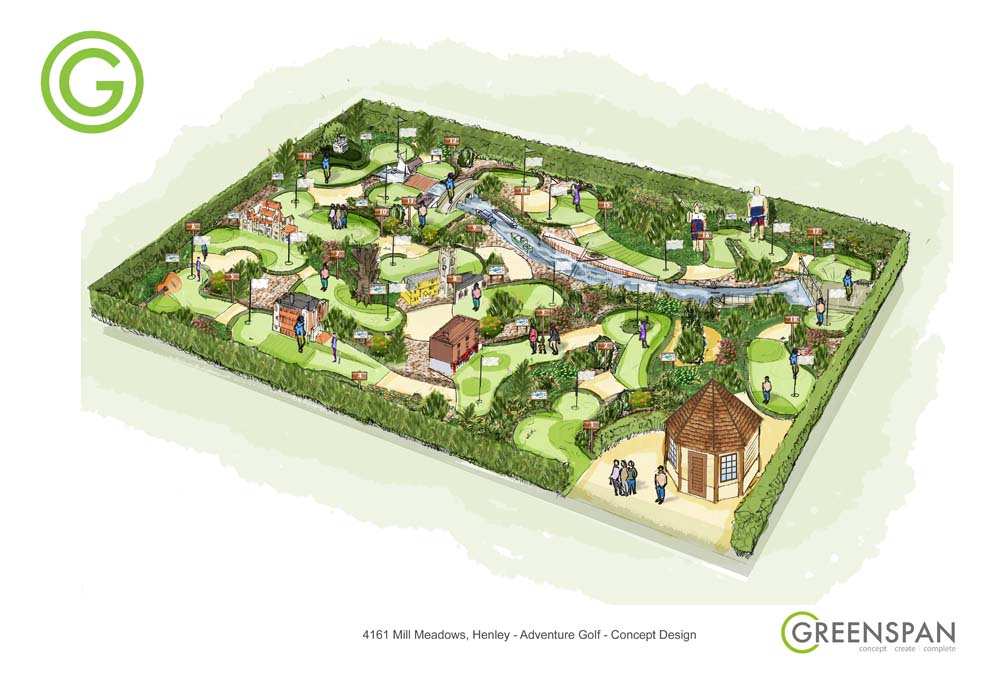 A £250K Adventure Golf Course business case was unanimously agreed by Henley Town Councillors on Tuesday evening to take it forward for a public consultation.

The high end 18-hole course complete with a mini Kenton Theatre, Town Hall and its very own rowing scull has been proposed to be installed on the former putting green at Mill Meadows.   It would be complete with a kiosk, CCTV and a course that celebrates the town’s heritage through themed ‘props’ including the Henley Bridge, St Mary’s Church and even a mini River Thames. The course is designed to complement its Green Flag surroundings. There are also allowances in the budget for a high level of maintenance and care has been taken to ensure the course is constructed from the highest quality materials.

The old Putting Green at Mill Meadows is situated between the Pavilion, Adventure Playground and Toddler Playground and was in use up until 2017.  Since then the area has not had any formal use, although it has been used by members of the public for football, picnics, etc, as an extension of the existing park facilities. The area is also within a flood plain. The Putting Green is constrained on all sides by the Adventure Playground, Toddler Playground, Pavilion, Bowling Green, and obelisk, meaning any use would need to fit inside the current footprint of the site.

The idea of transforming the space into a minigolf/adventure golf course was first considered by the Recreation & Amenities Committee in January 2020, after being approached by two local residents.  Since then, the Putting Green Working Group has been busy researching and considering the viability of the project and the best use for the space.  They have been working with Greenspan, Adventure Golf specialists on the design and costings.

If the public consultation is successful, Henley could have its own Adventure Golf Course by next Spring.  The consultation is set to begin in June 2021. It will be carried out prior to any build being approved and will focus on current Mill Meadow users directly. The public will be presented with the detailed designs and business case, including costings and projected financial return.

The business case presented by Town Clerk, Sheridan Jacklin-Edwards confirms that it would pay for itself in four years and then provide a profit of about £60,000 per year to help improve other Council services.

The income from the former putting green was around £1k per annum.  Peter Crook who used to work for Henley Town Council said, “Councillors for the most part did not want ever to keep the putting green up to the standard it should have been and this would have cost around £3000 per annum.  Now they propose to spend up to £250k.  It’s not warranted indeed and not needed in this fine facility which could run at a profit on a very small budget and make money.  I did a costing on this but HTC were not interested bar a couple of councillors. I believe this new venture has been put forward by the new Town Clerk so we would hope councillors will see sense and object to any over spend that in these times and it is tasteless. It’s also fair to say myself and another nameless person put forward a Mini Golf based on Henley and I had interested parties for sponsorship plus a competition but this was all rejected.   I offered at the time to take pressure off park services to maintain the green but this was rejected too.”

It promises a significant, sustainable, and low-risk income stream for the Council. Funds raised will support the Council’s other services and reduce the burden on the local taxpayer. Not only will the project subsidise the Council’s other work, it will also provide an activity that benefits local residents; supports the visitor economy and local businesses; and is accessible to all. Rather than increase Council tax to support greater spending, the Council would rather increase revenue streams from its existing assets.

Sheridan Jacklin-Edward, Town Clerk, comments, “The council seeks to complete the project because we are keen to develop the visitor economy in Henley and to support local businesses and tourist attractions, particularly in light of the pandemic. The adventure golf project will complement and augment the current visitor offer in Henley.  This is a superb example of the Town Council working at pace in response to an idea from our local community. This project offers an accessible local attraction that complements and enhances Henley and constitutes a clever investment. The designs are inventive and sympathetic to our beautiful town. Subject to the Council’s approval, the public consultation will begin in June and we look forward to hearing feedback on the business case and designs.”