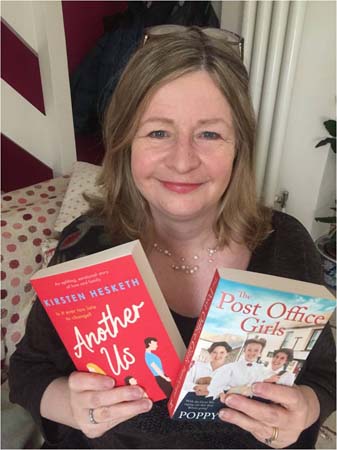 Local author, Kirsten Hesketh has just had her second book published, The Post Office Girls about the lives and escapades of the first women to work in the Army Post Office’s Home Depot in Regents Park in WW1.  This time Kirsten has published under her new pseudonym Poppy Cooper and the book is dedicated to her grandfather who fought in WW1 and worked in the Post Office sorting centre in London for most of his career.

Kirsten got her first novel, Another Us published last May which tells the story of Mum, Emma coping with her young son who has autism which was inspired by a family member who has this condition.  She started writing this book about five years ago and in the meantime, she got a two-book deal with publishers Hodder & Stoughton for The Post Office Girls.  Another Us has been nominated for the Romantic Novelists’ Association’s Joan Hessayon Award and longlisted for The Guardian’s Not The Booker Prize.

The Post Office girls follows the life of Beth Healey during WW1 , starting from her eighteenth birthday in 1915. After her twin brother Ned announces that he has signed up to fight, Beth decides to do her bit by joining the Army Post Office and is thrilled to be a crucial part of the war effort.  She soon makes friends with fellow post girls Milly and Nora, and meets the handsome James. But just as she begins to feel that her life has finally begun, everything starts falling apart, with devastating consequences for Beth and perhaps even the outcome of the war itself.

Kirsten comments, “I decided to write this series because I love history and my geography degree was essentially in social history. I’m fascinated by the whole concept of ordinary people living through extraordinary times and how they cope – and of course, World War One is a prime example of that. Plus – although it must have been a hideous time to live through, it’s also fascinating in terms of the hitherto unheard of opportunities it gave to women and the social upheaval that it started and I’ve tried to capture that in the first book.”

Kirsten got the inspiration for the story when she stumbled across a centenary postage stamp depicting the Home Depot in 2017.  She explains, “I’d never heard of the Home Depot – which was a huge wooden building (the largest in the world) thrown up on Regents Park in London in 1915 to cope with all the post being sent to troops at the various fronts.   I thought it might make a good backdrop for a story. They coped with sorting literally billions of letters and millions of parcels and there was also a Broken Parcels Department, parcels for prisoners of war, Honour Letters, censoring … most of it staffed by women.  I found it all fascinating and I hope others might too.  My publishers came up with my pseudonym Poppy Cooper which came from the obvious association with WW1 and poppies.“

Many people have started writing books during lockdown but researching for a historic novel has proven challenging for Kirsten.  She comments, “Mainly because all the libraries and museums were closed due to lockdown so it was a challenge doing original research. Luckily I managed to nip up to The Postal Museum before it closed and scour their Research Room and people have been enormously helpful in answering my many and varied questions.”

The e-book was published last Thursday and the paperback is being published on 13 May and will be available from The Bell Bookshop priced £8.99.