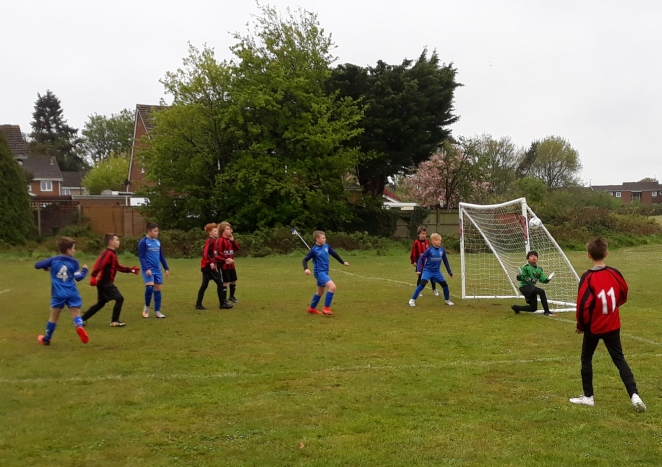 The AFC Henley Hurricanes U10s’ latest game was a league match against the Hawley Raiders, played on a blustery morning in Yately. The morning had started with an angry sky pouring forth rain, but as the match began the anger had subsided and the sky was merely sullen. A keen breeze cut across the ground throughout the game.

The Hurricanes were passing the ball well, Will Lindsay hitting the post from an Oscar Robinson cross. The rebound came to Nicholas Hernandez St Clair who found Jake Thatcher on the edge of the box, but his shot was slightly wide. The Raiders picked the ball up quickly and moved swiftly back up the pitch. Goalkeeper Harrison Carpenter Buckett was able to parry the first shot, but the follow up was on target.

This set the tone for the middle section of the match. The Hurricanes saw plenty of the ball. Jack Callaway chased a ball down well on the right wing, winning a corner, whilst Oscar Robinson saw one powerful shot saved, and a header fly just over the bar. However, the Raiders’ defence was very effective and there was no way past. The Raiders were also causing problems for the Hurricanes’ defenders, especially with their quick breaks.

The Hurricanes were looking to change the momentum, with a typically powerful shot from Will Goulden flying narrowly wide from the right wing. However, the game was being played in midfield, with neither having the upper hand. A Dominic Ellis free kick found Nicolas Hernandez St Clair but his shot was just wide. At the other end an accurate Raiders shot needed an equally smart response from Harrison Carpenter Buckett in goal.

Gradually the Hurricanes started to find their passing game. One particular move brightened the gloomy morning. Luca Currie, Will Lindsay and Jake Thatcher passed the ball well between them in midfield, finding Will Goulden in the goalmouth. The Raiders were also passing the ball well, forcing an excellent save from new goalkeeper Shiva Vadhoolan, who also did well to save from the resulting corner.

The pace of the game accelerated towards the end. Yet another rapid break from the Raiders cut through the Hurricanes’ defence, but the Hurricanes responded immediately. A long throw in from Dominic Ellis found man-of-the-match Will Lindsay, who slotted the ball past the keeper. In the closing minutes the Hurricanes pushed hard to find more goals, but the Raiders defended solidly. Oscar Robinson’s blocked shot was the last action of an enthralling game.