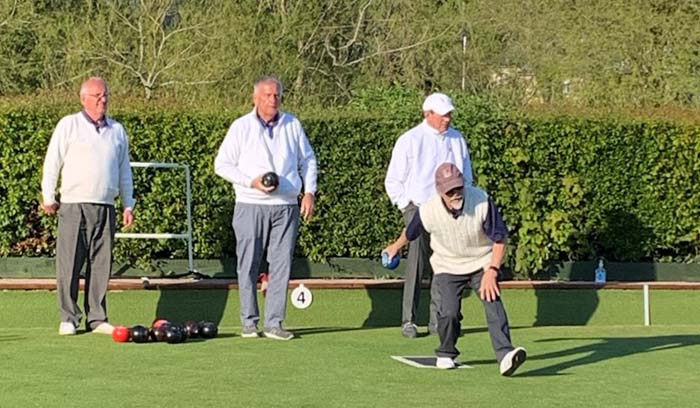 The Henley-on-Thames Bowling Club opened its green on 1st May after a cold April delayed grass growth. Members enjoyed a couple of Roll-Ups to get into the swing of things before playing its first competitive match on Thursday evening the 6th May. It was a men’s 4 triples friendly at home against Caversham and Henley ran out winners 78-68 although both sides won on 2 rinks.

The weather was sunny and it could have been warmer but at least it didn’t rain. Three new bowlers to Henley played, Simon Hatcher, Steve Isaac and Jim Walter. Simon skipped with Richard Kingston and Steve Sullivan, and were 9 down after 5 ends. They pulled it back to 2 shots down after 16 ends, but dropped 3 on the last ends to go down 14-19. Dave Wilson with Steve Isaac and Kevin Browne, we’re 9 down after 5 ends, then stormed into the lead by 5 shots after 11 ends, finishing 19-14 winners. Peter Borsberry with Nigel Bridges and Barrie Davies were level pegging after 4 ends, but dropped a 7 on one end to be down 4-14 after 8 ends. They fought back to gain 5 on one end, but went down overall 16-20. David Burdon with Andy Scott and Jim Walter picked up 4 on the first end and didn’t look back, running out winners 29-15.

On Sunday 9th May, Henley visited Woodley for a 3 triples mixed friendly going down 36-47, although winning on one rink, drawing on one, and losing on one. Simon Hatcher with Steve Isaac and Jeanie Davies started off slowly being 8 down after 6 ends. They were level 13-13 after 16 ends, and eventually won 15-13. Angie Isaac with Richard Kingston and Norman Daniells stormed into the lead by 7 after 8 ends, then were pegged back to 11 all after 14 ends. Leading by 2 on the last end they dropped a 2 which resulted in a drawn rink 14-14. Peter Borsberry with Romy Painter and Andy Scott were leading by 2 after 5 ends, but fell away only scoring 3 more, and losing 7-20.

Whilst our team played away, other members of the Club had another enjoyable Roll-Up in the fine and sunny weather. The season has now started properly although Covid is still constraining us to 24 players on the green. Here is hoping the 17th May announcements change that so we can get back to games of 5 triples.