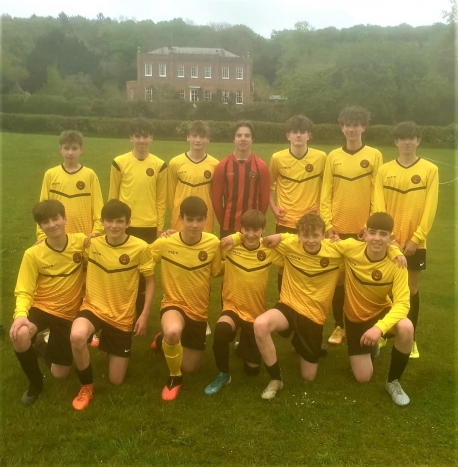 The U14 AFC Henley Hurricanes drew 1 1 at home against Maidenhead United in a fiercely contested match.

The hosts, playing at the beautiful home ground of Hambleden FC, started brightly and were almost 1 up after 7 minutes as Max Stokes used his pace to streak away from the United defence only to see his shot fly wide.

Tom Bonser, playing in his last game for the Hurricanes, was next to attack as he flew down the right and crossed perfectly for striker Harvey Herbert. Herbert flashed his shot inches wide as the Hurricanes started in a whirlwind.

Jack Johnson was having a barn storming game in the middle of the park, pulling the strings and acting as the heart beat of the team. He was fouled 25 yards from the United goal after some neat footwork and Herbert was unlucky to see the resulting free kick creep inches wide of the far post.

Joe Winpenny was occupying the wing back slot on the right side of the pitch and he had to be at his defensive best to cut out a menacing looking Maidenhead through ball.

Mid way through the first half the Hurricanes were presented with a gilt-edged opportunity to get their noses in front. Jasper Quinnell, playing alongside Johnson in midfield, threaded an exquisite through ball to Herbert who was felled under a mistimed challenge from the United keeper inside the box.

Herbert dusted himself off and took the resulting penalty that was well saved however. Finnbar Scott was the quickest to the rebound but again his well hit shot was held onto by the Maidenhead shot stopper.

This missed opportunity seemed to galvanise Maidenhead as they started to come back into the match.

However, they were met by a resilient back line, ably led by Joe Turner who was sweeping up everything that did manage to get through. Keeper Luca Thomson, who was playing in an unfamiliar role, had to make a crucial save late in the half to keep the scores level as the teams headed in all square at the break.

At the start of the second half Oliver Saunders hit a perfect 30 yard pass in behind the Maidenhead back line as he sent Stokes away. Stokes yet again showed his blistering pace to get away from the Maidenhead defence only to see his shot well saved.

The pressure soon told though as the Hurricanes broke the deadlock.

Scott took a free kick on the half way line and it evaded all of the United back line and fell to Johnson. Johnson was alert as ever and calmly slotted the ball inside the post to give the hosts a well deserved 1 0 lead.

Tom Atkinson, anchoring the midfield, set Henry Mendelssohn away with a ball that outfoxed the Maidenhead back line. Mendelssohn strode clear of the visiting defence and only just pulled his shot wide of the near post as he looked to put the game to bed.

Sam Archibald was working tirelessly in the left wing back position and he combined well with Scott to set him up for a good shot that was well saved.

With two minutes to go though Maidenhead snatched an equaliser that never looked likely. A free kick on the left was headed goalward and although Thomson did well to save the ball it still crept towards the line. It was eventually cleared but referee Paul Trimmings was satisfied that it had crossed the line despite the protestations of the home players.

The Hurricanes still had chances to win the game but, in the end, had to settle for a 1-1 draw.

Manager Atkinson said he was delighted by the performance of all the players and was looking forward to a strong end to the season.