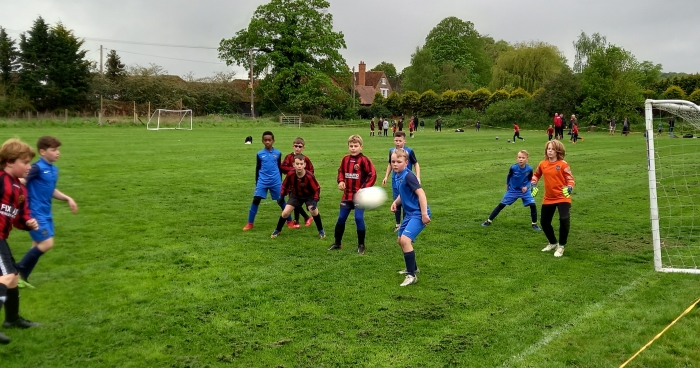 AFC Henley Hurricanes U10s latest match was a league fixture against Berkshire Elite, a couple of weeks after the away fixture. Typically the match began under skies thick with clouds, and the light drizzle which was falling made the playing surface slippery.

The game started competitively, both teams looking to gain the upper hand. Will Lindsay had an early shot on goal thanks to a good passing move involving Dominic Ellis, Jack Callaway and Oscar Robinson. Berkshire Elite had an equally good opportunity at the other end. A superb kick on the right found the goal, but was disallowed by the referee for a push on a defender.

The teams continued to match each other, searching for the upper hand. The Hurricanes put together a string of passes, Dominic Ellis, Luca Currie and Oscar Robinson combining to get the ball to Will Lindsay on the edge of the box, his shot just wide. At the other end, Berkshire Elite caused problems with their accurate crosses from corners. One headed attempt from a corner flew wide by the narrowest of margins.

When Berkshire Elite attacked, the Hurricanes defended. Jack Tookey cut out a promising move. At the other end, Oscar Robinson’s run was ended by some strong defending. A well-taken corner by Shiva Vadhoolan was matched by yet another corner for the Berkshire Elite, Harrison Carpenter Buckett calm in goal to collect the ball.

Finally, though, the pressure of the Berkshire Elite’s corners became too great. Yet another ball was put into the box, and via a few players was bundled into the back of the net.

As the drizzle started to fall more heavily, Berkshire Elite looked to press their advantage home. A free kick was well defended by Luca Currie with a headed clearance.

The Hurricanes started the third quarter in a more determined frame of mind. They had the best of the opening exchanges with opportunities for Jake Thatcher and Will Goulden. However, Berkshire Elite were able to see off this attacking spell and create more problems for the Hurricanes from yet another corner. This was a spell where Berkshire Elite were dominant, and the Hurricanes were forced to defend desperately. They weathered the storm, limiting the clear chances Berkshire Elite had, although struggled to put together enough passes to mount their own attack.

It was Berkshire Elite who started the final quarter most strongly, putting a shot into the side netting. A good passing move from man-of-the-match Luca Currie to Oscar Robinson found Will Lindsay on the edge of the box. His first firmly hit shot picked out the goalkeeper, but he collected the rebound and made no mistake the second time.

The game became more open, with chances for both teams. An opportunity for Oscar Robinson to score from a Will Lindsay cross was seized by the goalkeeper. Berkshire Elite also attacked; Luca Currie defending well and new goalkeeper Shiva Vadhoolan collecting the ball reliably behind him. Dominic Ellis was one moment racing back to defend, and the next running down the pitch to break. A neat pass from Oscar Robinson on the halfway line put him through on goal. An absorbing game ended with a free kick for the Berkshire Elite, which was cleanly gathered by Shiva Vadhoolan.