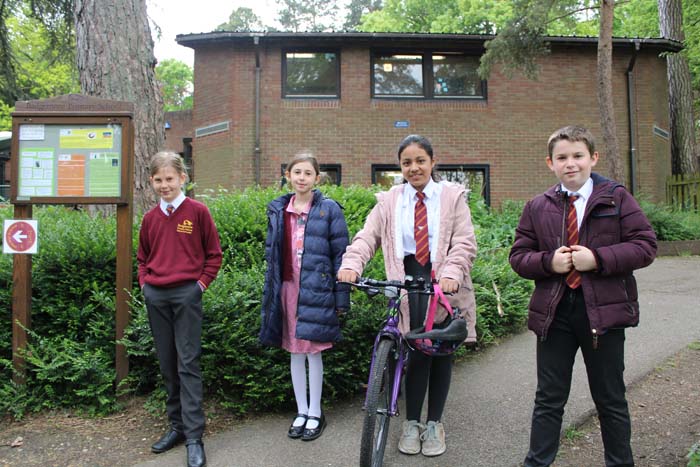 School children in Henley this week have been encouraged to walk, ride or scoot to school for national Walk to School week.

There have been some children who have really taken on the challenge as they live quite a distance from their school.

Two children at Badgemore School have shown fantastic examples of this.  Lucy who lives in Stonor normally comes with her Mum in the car to Waitrose car park and then Lucy walks up to Hop Gardens.  On a Wednesday each week, her Dad drops her off on her bike at the top of the Fairmile for her to ride to school from there.  This Wednesday however, her Mum and Dad joined her on their bikes to ride from home.  Lucy said, “It took us 45 mins to ride the 4 miles from home.”  Lucy and her friend Robyn came up with the idea to sell Walk to School badges this week in school.  She added, “I thought it would encourage people to walk or cycle.  I thought if we sell them we might make a bit of money for charity.  We’ve raised just over £23 for the Guide Dogs for the Blind.”

Dyllon also from Badgemore School who lives in Remenham, also gave himself a challenge.  He normally cycles from his house and then parks his bike in town before walking up to school.  On Thursday and Friday he decided he would run to school instead. Dyllon said, “Yesterday I managed to do it in 40 mins when it was quite windy and I realised I had a heavy bike lock in my pocket which weighed me down.  Today I remembered to take out both bike locks and got here in 34 mins.  I do like running.  When we go on a walk, I sometimes start running.  I think I’m better at running for longer times after this week.  Running meant I had a closer look at the swan’s nest on the river and a pigeon which was very cute, climbed on my arm for a few seconds.”

Lucy and Dyllon’s classmates Isla and Brigette have enjoyed the week too.  Isla who normally always either walks or scoots to school said, “It’s been a lot better this week as there seems to be less cars  it’s lot easier to cross the road at the end of Hop Gardens with my friend and there a lot less cars outside the school too.”  Brigette has been cycling from her house all week instead of walking.  She said, “I like cycling as its much faster than walking and it’s a good work out coming up Gravel Hill.  Instead of taking half an hour it takes 20 mins on my bike.”

Tim Hoskins, Headteacher of Badgemore School said, “I am so proud of the Badgemore Community. We set the challenge knowing that it would be a very wet week and despite this everyone has risen to the challenge. It has been a beautiful sight each morning seeing an empty road void of cars. Our pupils have benefited from gaining extra exercise before and after school, Hop Gardens has been safer to cross and, although we can’t see it, there has been less pollution hanging around the school. I’m hoping that we can see more empty roads in the future.”

Catherine Fuller at Rupert House walked 7km from her home in Rotherfield Peppard to Rupert House School in Bell Street, on Thursday with her Mum, Rebecca. They left home at 6.30am and the journey took them 1 hour 22 minutes.  Mum Rebecca said, “Walk to school week was a great opportunity for us to stop, pause and make the time to enjoy the wonderful countryside in south Oxfordshire. Whilst it’s a distance that isn’t practical for us to walk everyday it was fantastic to have the time to discuss the environmental impact that driving can have and how we can all play a role in reducing our carbon footprint.”

Jemima Judge walked to Rupert House school with her Mum from Shepherds Green this morning. Her Mum, Katrina, is the Founder and Director of Young Climate Warriors. She said “They walked to school, inventing a new super green car together whilst on route (as part of our STEAM week this week).”

Mrs Newman, Head of Pastoral at Rupert House said, “Not only is walking to school better for the environment but it is also better for the physical and mental well-being of our pupils and, indeed, our entire school community. Over the past year, due to the fallout from Covid, many people have found their mental and physical health has been compromised, so this year’s walk to school week is even more important than ever.”

David Dickie from Clean Air Henley said, “When young I always walked to school but lately had worried this was never going to happen any more. Over the past couple of years and during the pandemic it would seem parents and children are together enjoying active travel as fun. Well done to these schools for helping to reduce pollution near our schools and in our town centre. Hope more will follow their example.” 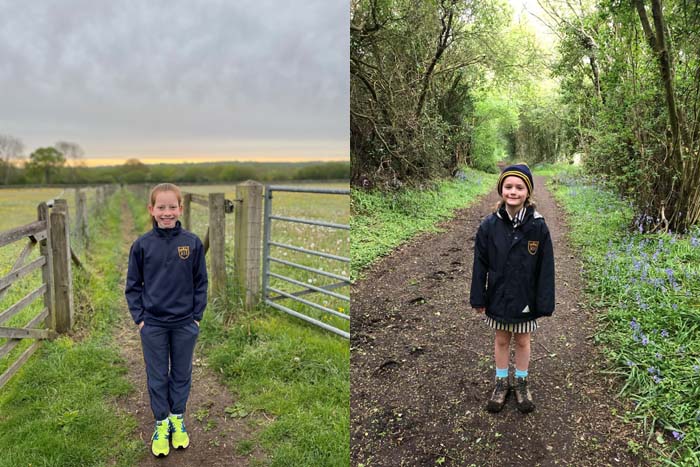