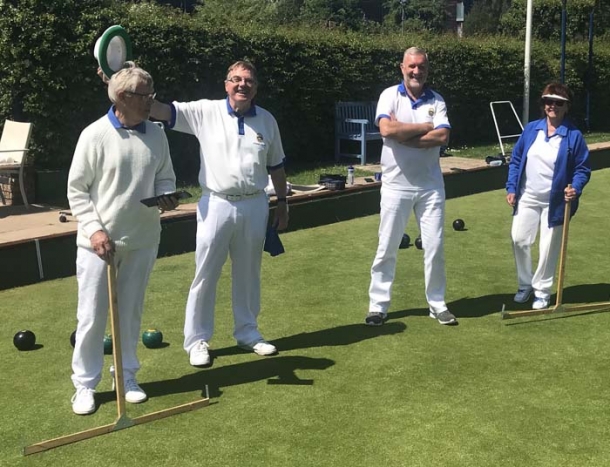 Henley Bowling Club had two most productive matches in their Oddfellows Triples League matches, gaining a maximum haul of 28 points, which should project them to the top of the table.

On Wednesday evening (26 May), they entertained Goring & Almshouses in a 4 triples OTL match winning on all rinks by the margin of 96-47, and all triples scoring at least 20 shots.

Angie Isaac with Kevin Browne and Norman Daniells picked up 8 shots on end 3, and raced to a 16 shot lead after 7 ends, running out winners 24-6.
Simon Hatcher with Richard Kingston and Jeanie Davies were level 8 all after 5 ends, but then gradually drew away winning 29-13.
Barrie Davies with Angelika Crisa and Steve Sullivan were 12 up after 6 ends, and 17 up after 11 ends, and eventually winning 23-15
Dave Wilson with Romy Painter and Andy Scott were 14 up after 13 ends, but then dropped a 5 and 3 to finish winners 20-13.

On Saturday 29 May they entertained Pangbourne in a 4 triples OTL match winning by the margin 100-47, again securing a maximum 14 points.

Peter Borsberry with Angelika Crisa and Colin Ward had the highest winning rink, although after 4 ends they were down 3 shots, they never looked back from there, winning 32-5.
Angie Isaac with Keith Lawrance and Jim Walter had the closest winning rink leading 16-15 after 17 ends, and picking up a 2 on the last end to win 18-15.
Norman Daniells with Steve Isaac and Jeanie Davies raced into a 15 shot lead after 7 ends, dropping 9 on the next 2 ends, then winning 29-12.
Barrie Davies with Lynn Sayer and David Burdon were level 8 all after 8 ends, then picked up 8 on the 13th end running out winners 21-15.

Then on Sunday 30 May, the Club held the first of its three One-Day Competitions of the season, the Yardstick. This game is about trying to draw to the jack and get all your bowls within 1 yard of it. The format varies according to the number of entrants and this year we had 3 Pools of 6 players, each of whom played each other in a round-robin. Each player played 5 games of 6 ends each using 4 bowls so it is quite a long day but it makes for a social as well as a challenging bowling event. The fine weather also played a great part in making it a great day. Angelika Crisa won the Ladies’ event with Jeanie Davies as runner-up. The Men’s event was won by Norman Daniells with Barrie Davies runner-up. We were also pleased to see James Turner and Peter Goddard, two of our new members, joining in the fun.