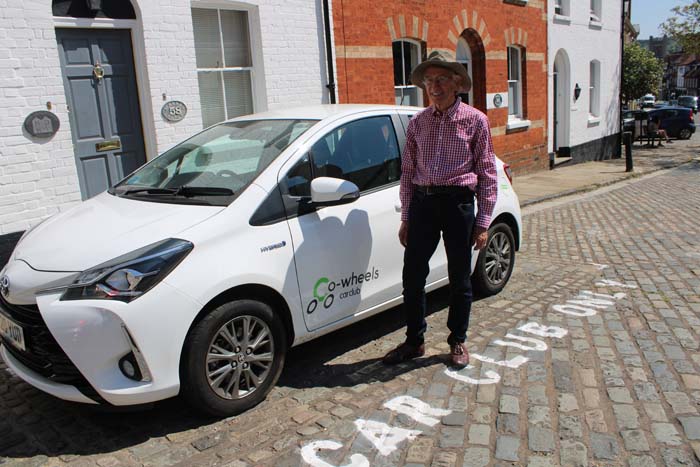 Two brand new Co Wheels automatic Toyata Yaris are now parked up in Henley for residents to take advantage of via the Henley Car Club.

The two hybrid cars are currently available from bays behind the Town Hall.  By early July it is hoped that one of them will be moved to Reading Road outside Gibbs & Dandy when the bay has been marked up.

If you’re driving less than 6,000 miles per year, then joining the Henley Car Club can definitely save you money and you would be free of sorting out repairs, MOT, insurance etc plus if you live in the centre of town and have trouble finding a parking space, the car club car has its own dedicated parking bay!

Joining the Henley Car Club is just £1, (normally £25) and new members will be offered a £25 driving credit for a limited time.  Once joined you then receive a smart card and you can then book online or by phone and access the car using your smart card – no need for keys. After your trip you take the car back to its bay and are then billed just for the time and distance you have driven.   Charges are £5.50 per hour (in 15 mins increments) or £38.50 per day + 18p per mile.  There’s no need to pay for petrol either, a fuel card is in every car.  There’s just a minimum of £5 monthly spend which is taken off your bill when you drive.

The idea for the Car Club was put forward by Dave McEwen after a research transport project Henley in Transition (now Greener Henley) completed in 2013 with Henley College students to look at ways of reducing carbon footprint and air pollution in the town.  The Car Club cost for the first two years is £24K.  The Town Council agreed to fund 50% of this from the Community Infrastructure Levy (money from housing developments) and the other 50% will be funded by South Oxfordshire District Council.  It is hoped that within the 2 years that the Car Club becomes self-funding.

David has already used one of the cars, he said, “My wife and I have one car between us and when she had the car to visit her Mum and I wanted to go and see my grandson play football in Pangbourne it was perfect.   I feel ecstatic and I can’t believe it’s finally here.   It gives people another option and the big selling points are it saves money, saves hassle of owning a car and if you live in the centre of town it takes away the headache of finding a car parking space.  It is a real green initiative.  They say that 1 car club could replace 6 individual owned cars.  I’m hoping the next cars we have will be electric vehicles.  These first two couldn’t be as we would have to have waited for Oxfordshire County Council to agree where the EV points would be.”

Co Wheels Regional Manager for UK & Wales, Jonathan Collinson said, “There is some great effort going in to reduce carbon emissions in Henley.  Co Wheels are absolutely delighted with the strong support from the Council and community group, Greener Henley, as they have been instrumental in getting the scheme up and running. We are now able to provide two low carbon vehicles as part of a pay-as-you-go car club for residents and businesses to use.

“With the majority of cars sitting on the drive 97% of the time, we’re making it more accessible for people to have the option to hire one of two hybrid pay-as-you-go car for the 3% of time they do need to use a car, rather than owning their own vehicle – it’s far cheaper and better for the environment this way.

“We are delighted that there has already been a strong start to the car club in Henley. We’ve had ten members join, 58.5 booked driving hours and 634 miles already driven since the cars were introduced in April.  These are hopeful these numbers continue to increase and are celebrating the launch by encouraging people in Henley to try the car club with a £1 membership and £25 driving credit to try our service by visiting https://www.co-wheels.org.uk/henley .”

Greener Henley volunteers will be dropping a Car Club leaflet through doors to homes that are 10 mins walk to the current Car Club cars.  They are planning to do a further door drop in July and would welcome more volunteers.  Please get in touch if you would like to help by emailing greenerhenley@gmail.com

Changes on the High Street
Scroll to top