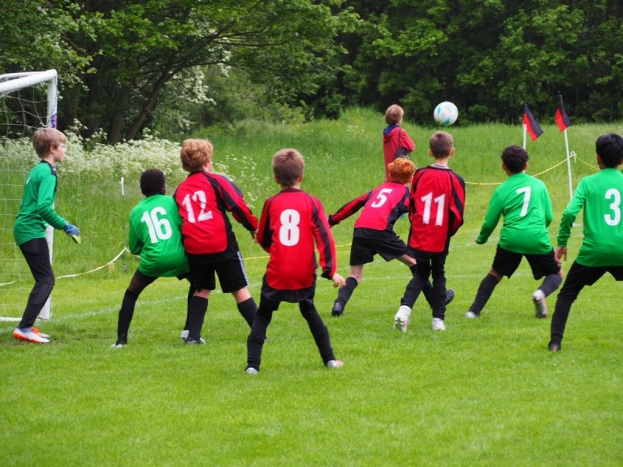 An overcast morning was the backdrop for the AFC Henley Hurricanes U10s’ penultimate league fixture, a home match against Eldon Celtic Panthers. The early summer scene was completed by teams playing on the adjacent pitch, birds and insects overhead and, higher up, the occasional plane drifting lazily to its destination.

The Panthers, however, were in more of a hurry. From the first whistle the green shirts surged forward, pressing the Hurricanes hard and seizing an immediate advantage with two rapid, powerful strikes. This set the tone for the early exchanges, with the Panthers hungry for more and the Hurricanes defending hard. There was a glimpse of the Hurricanes’ passing game, Will Lindsay, Oscar Robinson and captain Nicolas Hernandez St Clair moving the ball well but the shot was over the bar. The Panthers, in response, fired an accurate long ball down the pitch to create another chance on goal.

Despite the early setbacks, the Hurricanes continued to try and pass the ball. An adept passing move between Oscar Robinson, Will Lindsay and Nicolas Hernandez St Clair created an opportunity for Oscar Robinson to tuck the ball away cleanly.

Both teams were trying to assert their authority, but neither managed to do so. For the Hurricanes, Oscar Robinson took the ball past three defenders but his shot was well saved by the Panthers’ keeper. The Panthers were moving the ball well, Jake Thatcher and Will Goulden making tackles to keep out the danger. Some sharp passing between Will Lindsay, Nicolas Hernandez St Clair and Oscar Robinson yielded a chance on goal, but again the keeper was up to the challenge. A great free kick from Will Goulden brought an equally good save. The Panthers looked dangerous when they moved the ball forward, but the Hurricanes’ defence held out, and goalkeeper Harrison Carpenter Buckett dealt with their strikes well.

As the game entered the final phase the Hurricanes’ work rate was undiminished. Will Goulden was chasing down the ball, a shot by man-of-the-match Jake Thatcher went narrowly wide, whilst at the other end defender Dominic Ellis made a decisive tackle to dispossess a Panthers forward. The Hurricanes were increasingly effective in possession. Nicolas Hernandez St Clair won the ball well in midfield, Oscar Robinson was pushing hard up front, one shot flying just over the bar. Dominic Ellis was putting in some long throw ins. In almost the last minute of the game it was Will Goulden who finally found a way past the Panthers’ defence. His rocket-like shot from well outside the box proved unstoppable.

After another competitive and entertaining game, the Hurricanes go forward to their final league fixture next weekend.