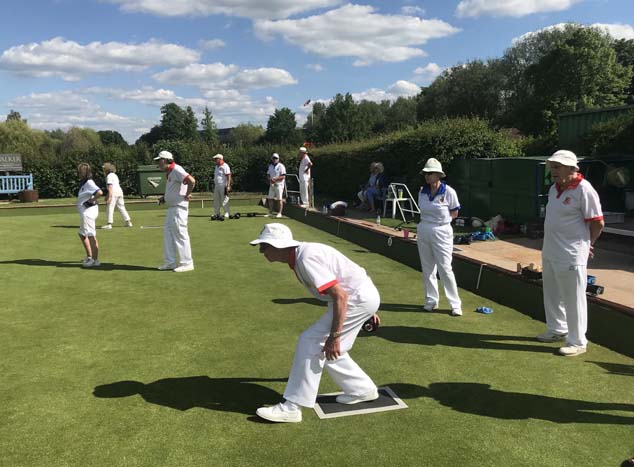 Henley Bowling Club competed in four matches in the last week.  They came out on top in 3 out of the 4.

On Tuesday 1 June, Henley entertained Palmer Park men in a 3 triples friendly, winning by the narrowest of margins 53-52, although losing on 2 of the rinks. Barrie Davies with Dave Palmer and Peter Borsberry were 5 up after 8 ends but were pegged back 10-15 after 14 ends. They could not get back in front and went down 14-17.
Kevin Browne with Nigel Bridges and Jim Walter were 5 down after 7 ends, but picked up a 5 on end 8 to draw level, but dropped 11 shots on the next 8 ends, then finished strongly picking up 4 on the last 2 ends to go down 15-21.
David Burdon with Richard Kingston and Andy Scott were level 7-7 after 5 ends and 12-12 after 10 ends. From there, they didn’t look back, running out winners 24-14.

On Wednesday 2 June, Henley visited Maidenhead Thicket in a 4 triples mixed friendly, (although Henley were all men) and went down 51-91, losing on 3 rinks.
Steve Sullivan with Nigel Bridges and Peter Borsberry were 7 down after 10 ends, and 1 down after the 17th end, but came good picking up 2 and running out winners 16-15.
Barrie Davies with Steve Isaac and Maurice Robins were 5 up after 9 ends, but gradually fell away going down 15-25.
Andy Scott with David Maybury and Jim Walter were 2 up after4 ends but were never in the match after that ,going down 12-27.
Norman Daniells with Richard Kingston and Kevin Browne struggled from the start and went down 8-29.

On Saturday 5 June, Henley entertained Wargrave in a 4 mixed triples friendly, on a beautiful afternoon, winning on 3 of the 4 rinks, by the margin of 17 shots.
Once again Peter Borsberry with Joan Edwards and Steve Sullivan had the highest winning rink with a shot difference of 18, having raced to a 14 shot lead after 5 ends, but dropping a 6 on end 7. Eventually finishing with the score 30-12.
Angie Isaac with David Maybury and Steve Isaac had the closest of games. Although they sped into an 8 shot lead after just 3 ends, they dropping an 8 on end 17 to take the score to 23-22. Henley held their nerve to run out winners 24-22.
Colin Ward with Lynn Sayer and Norman Daniells struggled from the start and were 16 down after 11 ends. They then picked up a 4 but their comeback wasn’t to be and they went down 9-24.
Dave Wilson with Rosie Maybury and Kevin Browne were pretty even at 7-9 after 9 ends, and then Jeanie Davies replaced Rosie. Henley didn’t look back from there, running out winners 27-15.
The final score being 90-73.

On Sunday 6 June, Henley entertained Reading in a 4 triples Oddfellows Triples League match winning on 3 rinks. They had an overall winning score of 80-58 which resulted in 11 1/2 points to Henley and 2 1/2 to Reading.
Norman Daniells with Steve Isaac and Jeanie Davies raced into a 23 shot lead after 13 ends, but dropped 11 on the last 5 ends to run out winners 26-14.
The other 3 rinks started slowly and were all down at least 6 shots after 6 ends.
Dave Wilson with Joan Edwards and Rod Grant scored regularly after 6 ends to narrowly win 21-18.
Angie Isaac with Andy Scott were 11 down after 10 ends, then picked up 8 on the next 2 ends, but couldn’t maintain their momentum, going down 11-16.
Barrie Davies with Angelika Crisa and Richard Kingston picked up after 6 ends, winning 10 of the remaining 12 ends to win 22-10.

Henley have started strongly in the Oddfellows Triples League gaining 59 1/2 points out of a possible 70 from their 5 opening matches.

Golfers Raise £2,500 in the Sunshine for The Chiltern Centre
Scroll to top