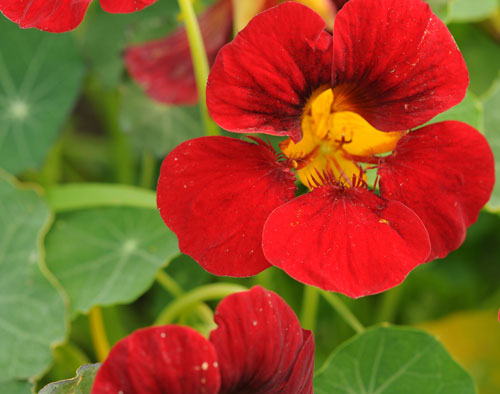 Last month we were complaining that we couldn’t get on with things.  Now, all of a sudden, there’s too much to do. Thanks to the rain, the weeds have been growing rapidly.  But then we have a run of dry days – and perfect conditions for hoeing them away.  Once hoed, it’s fine to leave the annual weeds where there are.  They’ll soon rot down – adding nutrients to the soil where they grew.

Carrying on the tradition

Whether we plan to grow Runner and French beans on the allotment or in our gardens, now is a good time to be planting them out and sowing directly.  It’s a bit later than usual, but it hasn’t been a usual kind of year.   Or perhaps you grow Harry Lovejoy beans?  No, I hadn’t heard of them either.  Dave and Sally from Greencroft Allotments explain:

“Harry Lovejoy was a plot holder on Greencroft Allotments until the 1970s.  He bred his own strain of runner beans.  They are longer and straighter than normal runners – and delicious!  Rumour has it that Suttons bought the strain from Harry and renamed it Enorma ……

There is a tradition on Greencroft that at least one plot holder will keep the strain going.  Graham Jones did this for many years.  When he retired from allotment gardening, we felt we should continue the tradition.

We sow them late, partly to get a crop in September when earlier sowings are finishing, and partly because we want to save our own seed.  Sowing them late helps to avoid cross-fertilisation with other runner bean varieties grown on our site.  We also sow at the far end of our plot – as far as possible from our other runner beans.  Every year we save seed and share with other plot holders.  Hopefully, the tradition will continue long into the future.”

Veg in the garden

Jean, another Greener Henley member, has been planting out her crops in her garden.  There are beans, but also lettuces, pumpkins, butternut squash and tomatoes.  She’s also sowing lots of basil, something I’ve been meaning to do for a while.

I’ll be taking the sweetcorn I’ve been nurturing at home to the allotment this week.  It’s wind pollinated so has to be sown in blocks rather than rows.  Looking at the forecast, they’ll need a good watering in.

At home, I’m still sowing lettuces.  The aim is to sow little and often while remembering that it doesn’t germinate well in the heat.  I’m also sowing ‘Summer Purslane’.  Delicious, shiny and crunchy leaves that add a bit of bite to a salad.  It’s not something we are likely to find in a supermarket.  I probably first came across it at Bosley Patch – always a good place for discovering and buying an amazing variety of salad leaves.

How was your ‘No Mow May’?  Haven’t some of the verges looked incredible?  Either it’s a particularly good year for cow parsley or it’s enjoying having the opportunity to flourish.

I’m loving the yet-to-be-identified tiny pink vetch-like flowers that have appeared in my lawn.  They can continue to grow alongside the patches of self-heal, clover and daisies that have appeared over the last couple of years. I’m leaving one strip uncut all summer just to see what else appears.

Thanks to Greener Henley Swift Group, a few swift boxes have been installed around Henley.  I now have one on the north side of the house.  Until swifts start nesting in it – that could be a couple of years – we must play a recording of swift calls for a few hours a day.  It was amazing to see how quickly swifts began to circle high overhead when the recording was first switched on.

The Henley Herald website provides an up-to-date and unbiased digital news service for
Henley-on-Thames
Kick Start Your Summer With a Glamorous Day Full of Super Models at Stonor ...