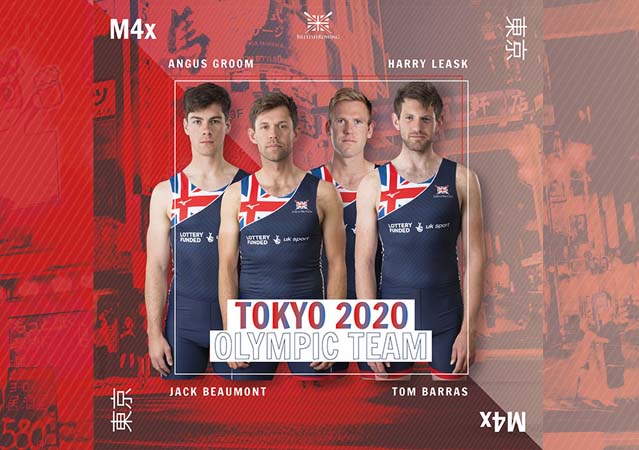 Twenty-three Leander Club rowers have been selected in the Team GB squad for the Olympic Games in Tokyo in August which was announced by the British Olympic Association yesterday (Wednesday).

Polly Swann will be partnered with two-times Olympian, Helen Glover in the women’s pair.  Helen will be the first British Rower to compete in the Olympics after having children.  Polly said “It’s unreal. It’s one of those things – when you get nominated, you’re expecting it and then it sinks in and you realise what it means. It’s very special. Going to an Olympic Games is what we are all here for. I cried when the letter arrived, because I’ve been on such a journey this Olympiad after choosing to take time out working for the NHS during the pandemic last year.  Being in the boat with Helen takes me full circle. I competed in my first World Championships with her and this is going to be my last Olympic Games and there’s something special about that. I love that the two of us have chosen to come back after time away and we’re doing it because it’s a sport we love and I think racing at this Olympics will mean a little bit more to both of us.”

Returning for her third Games is Rio 2016 silver medallist Vicky Thornley, who is realising her dream of racing in the women’s single sculls (W1x). She said: “When I started this journey in 2017 my long-term goal was to compete at the Olympics in the single, so to be selected in this boat is a really special moment.”

Leander’s Jacob Dawson, Tom George, Charlie Elwes, Oli Wynn-Griffith, Tom Ford and cox Henry Fieldman will be joined by Josh Bugajski, Mohamed Sbihi and James Rudkin in the men’s eight where they will be aiming to build on this year’s European title.

Matt Rossiter and Sholto Carnegie from Leander will be joined by Ollie Cook and Rory Gibbs in the men’s four and will continue the historic success in this event building on their wins in Europeans and World Rowing Cup II.  Speaking of making his Olympic debut, Matt said: “It’s what I’ve wanted for the last 20 years and it’s taken a few days for it to actually sink in but it feels pretty awesome. There is a phenomenal heritage of men’s fours from Great Britain but ultimately we want to go as fast as we can and write our own story.”

The men’s quad, who won bronze at this year’s World Rowing Cup II, is made up entirely of Leander scullers Harry Leask, Angus Groom, Thomas Barras and Jack Beaumont.

Other Leander athletes include Hannah Scott in the women’s quadruple sculls, John Collins with Agecroft’s Graeme Thomas in the men’s double sculls and Rowan McKellar and Karen Bennett in the women’s four.

Former Leander Club M8s Gold Medallist Will Satch announced today that he’s taking a sabbatical from international rowing. Will is current Olympic champion after winning gold in the men’s eight at Rio 2016 and has amassed an incredible 25 international medals to his name to date.
Reflecting on his decision to take time away, Will said “It’s been a great ten years competing for GB and I feel incredibly lucky to have worked with world-leading coaches and athletes but this isn’t the end for me, I’ll be back.
“After three operations over the past two Olympic cycles, coupled with the additional training block brought about by the delayed Games, it became clear that my body needed a rest. I love the sport but there’s no easy route to being the best and if your body isn’t up to it any more then you have to listen and give yourself time to heal.”
Will is currently in New Zealand, where his fiancé relocated last year to work as a doctor at Christchurch Public Hospital.